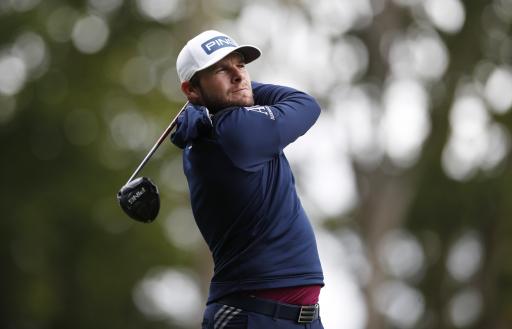 Tyrrell Hatton has captured his first ever BMW PGA Championship at Wentworth with a commanding four-stroke victory following a final-round 67.

The 28-year-old saw his overnight three-stroke lead evaporate on the opening nine after Victor Perez closed the deficit by the 7th hole, but the Englishman resumed control of the tournament on the closing holes.

Perez was left to rue two costly bogeys at the 13th and 17th to hand the initiative back to Hatton, who then stamped his authority on the tournament with a clutch 12-footer for birdie at the tricky 15th.

Hatton, who at the start of the day admitted to feeling even more nervous than he did at the 2018 Ryder Cup, finished the week on 19-under par and four strokes clear of Perez.

The victory on home soil marks Hatton's fifth career European Tour title and his third Rolex Series win to go alongside his triumphs at the 2017 Italian Open and 2019 Turkish Airlines Open.

It also vaults Hatton into the world's top 10 for the first time in his career.

"It's unbelievable," said Hatton. "This was a goal of mine to win this tournament in my career. Part of me is sad not to experience it with the fans here, but it's amazing to win this trophy."

He added: "It was probably the worst I swung the club over the four days, so I'm delighted to grind it out like I did."

Andy Sullivan flew home with a 65 to take third place on 14-under par alongside Race to Dubai leader Patrick Reed, while Ian Poulter made his best ever finish in the tournament with a solo fifth on 13-under par.

Eddie Pepperell finished a further stroke back on 12-under par.

Golf news
Paul Casey's wife gave him a STEAMY Ryder Cup gift and this is how fans reacted
Ryder Cup
Lee Westwood reveals the BIG CHANGE he would make at the 2023 Ryder Cup
PGA Tour
"I would love to do it": Dustin Johnson on future Ryder Cup captaincy
PGA Tour
Justin Thomas reveals what he has done with the MAJORITY of his Ryder Cup gear!
Golf news
YouTuber Rick Shiels BACKS £200 million plan to bring the Ryder Cup to Bolton