Hartford Golf Club stops the tradition of men and women teeing off from different positions. 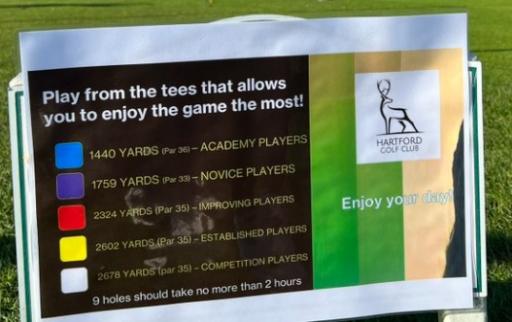 Hartford Golf Club in Cheshire has confirmed it has abandoned the tradition of men and women teeing off from different positions based on their sex, and is instead inviting golfers to select tee boxes based on their distance and playing ability.

The club announced their news on social media and their decision has instantly taken the golf world by storm this week, with some in favour of the move and others not so much.

We’ve moved away from gender tees like this Golf Club below & we base it more on ability but most importantly - game enjoyment!

What do you think? Is this the way forward for golf? pic.twitter.com/Wr8GkAfJxN

Hartford GC posted on its social media this week: "We’ve moved away from gender tees like this Golf Club below & we base it more on ability but most importantly — game enjoyment! What do you think? Is this the way forward for golf?”

The club is encouraging players that shoot more than 100 a round to go off the red tees.

Those who shoot below 100 are to go off the yellows, below 90 off the whites, and less than 80 off the blues.

Some golf clubs in the United States have already taken up this idea, and it is anticipated many clubs like Hartford GC will do the same in the United Kingdom in 2022.

Those in favour of the move argue it helps to maintain good pace of play by dividing golfers by preference and ability, as well as being a forward-thinking idea to take the sport forwards.

Those against the idea accuse the club of virtue signalling.

At most golf clubs around the world right now, there are different tee positions with men teeing off further back (typically white and yellow tees) and women teeing off slightly further forward (red tees)

Other clubs vary their tee positions in a bid to suit veteran and junior golfers, too.

Hartford Golf Club's immediate goal is to encourage more golfers to take up the game, and especially women.

It is hoped a more relaxed approach to where exactly to tee off will help do that.

"As our regular readers will know - we are a progressive and modern Golf Club and we have moved away from gender-specific tees, we now have 5 different colour tees to play from and we want you to be happy to play from whichever tees will allow you to enjoy your game the most," writes Tim Barnes, owner of Hartford Golf Club.

"When we posted on social media about this progressive move (even though we actually did it a while ago) it went viral! There was interest from BBC and Sky News supporting our move by featuring us on their social media pages, then on Tuesday morning we popped up on millions of iPhones under the Apple News Section thanks to an article on a US golf website.

"So just as a reminder - we now have signs up to give you a guide about which tees to play from, for handicap rounds we still need to get some of the tees measured and rated by England Golf (as they missed them the first time they visited) but for social golf the first 4 tee colours are all available to play from in the winter.

"We believe that sometimes playing from shorter tees, especially in the winter, could allow many of our golfers to enjoy their games even more!

"What do you think? Send us a message to let us know your thoughts..."

To learn more about Hartford Golf Club and leading the movement in allowing golfers to tee off based on ability rather than sex, head over to their Twitter page or visit their website.