Long Live 'The King' - flashback to Arnie's incredible farewell shot at the 18th hole at Bay Hill in 2004... 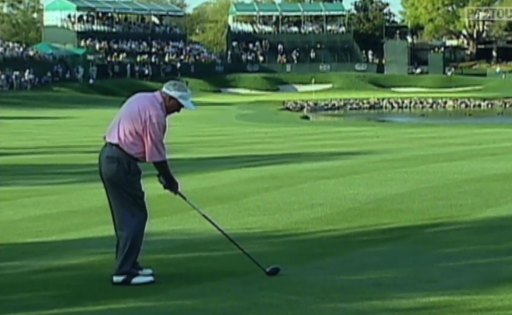 There have been many memorable shots played into the famous par-4 18th at this week's Arnold Palmer Invitational at Bay Hill, but few will ever rival that of the man himself playing his final ever shot in the tournament back in 2004.

Palmer, who passed away aged 87 in 2016, was way off the cut mark when he stood over his approach into the final hole 15 years ago, but that didn't stop the seven-time major champion wanting to bring the house down in front of his adoring fans.

Watch Palmer give it everything he had with a driver off the deck from outside of 230 yards, threading his ball down the fairway and away from the water into the heart of the green...

Nobody hits driver off the deck like Arnold Palmer.#ArniesArmy#TOURVault pic.twitter.com/V0RYgYynbI

Yes, you could look at Tiger's victory putt here in 2008 or even Robert Gamez holing out for the win from the fairway in 1990, but for us, Arnie's final farewell shot in 2004 will forever go down as the greatest shot ever played at Bay Hill.