Tiger, fans, media - this fan got a lot of hate for distracting Woods. 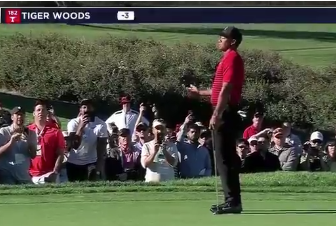 Another PGA Tour event, another moronic golf fan yelling at an inappropriate time. But to make things worse, this time it was in the backswing of Tiger Woods - not a good idea.

Shortly before Tiger struck a putt on the 13th hole in the final round at the Farmers Insurance Open, someone yelled “get in the hole” causing Woods to stab his shot to the right.

The 14-time major champion seemed tangibly hurt as the crowd made their feelings clear towards their fellow spectator.

Some fans reacted aggressively to the perpetrator, who was full of apology.

It is reported he was thrown out of the event, with some publications suggesting he should be banned for life from attending tournaments.