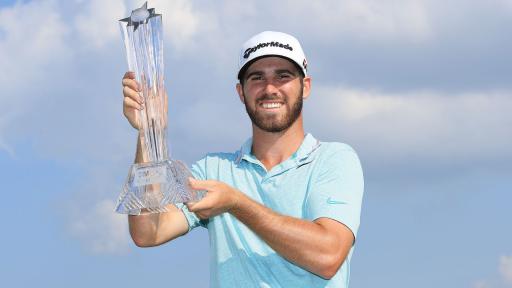 Matthew Wolff claims his life has "changed forever" after sinking a 30-foot eagle putt from off the green to win his maiden PGA Tour title at the 3M Open in just his third professional start.

Wolff, 20, eagled the 18th hole at TPC Twin Cities, just moments after Bryson DeChambeau had moved one stroke ahead of him following an eagle in the group ahead.

He then stood to the side as he watched playing partner Collin Morikawa narrowly miss an eagle putt to force extra holes.

Wolff becomes the youngest winner on the PGA Tour since Jordan Spieth won the John Deere Classic in 2013.

The American, with one of the most talked-about golf swings in the world, also becomes the third player after Tiger Woods and Ben Crenshaw to win an NCAA individual championship and a PGA Tour title in the same year.

"It's a really special feeling," said Wolff, who can now play on the PGA Tour through to 2021, and he also qualifies for next year's Masters and US PGA.

"I just proved to myself I can be out here. I've changed forever."

On his epic 30-foot eagle putt, Wolff said: "I was shaking, to be honest. A lot of my putts weren't going in today, and I was just kind of telling myself one's bound to drop in.

"It happened at the right time. I just gave it a chance and it went over the right spot that I pointed out. And as soon as it dropped, the tears started coming."

Wolff finished on 21-under par and one stroke clear of DeChambeau and Morikawa.