WATCH: Poor golfer has an ABSOLUTE MARE on the edge of the bunker

Spare a thought for this golfer, who had something of a shocker on the edge of a fairway bunker... 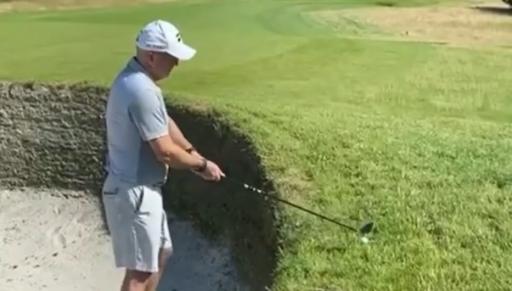 A video of a golfer having an absolute shocker on the edge of a fairway bunker has gone viral this week, and it's a sight for sore eyes.

We can also assure you that you will want to stay until the very end of the following video, which was posted to Instagram by @olidrummer1:

The man's ball ended up on the edge of the bunker, and to be fair, it left him with a very difficult stance in the sand with the ball in line with his knees.

He could have taken a unplayable, but do us golfers ever do that... of course not.

The man steps into the sand and proceeds to swipe away at the ball, only he hits well before the ball.

He has another go, and tops the ball in front of him.

Out he comes to rake the bunker with a smirk to the camera, and then he steps up to his ball with his feet resting on the lip of the bunker.

Remember that classic game 'Snakes and Ladders'? Let's just say he landed on a snake with his next shot.

NOW WATCH: LADY GOLFER HAS AN ABSOLUTE SHOCKER ON THE RANGE SO SHE DECIDES ON A NEW STRATEGY