Watch: Thomas gets fan ejected for shouting "get in the bunker" after tee shot

Justin Thomas has been attacked by some for this, praised by others. 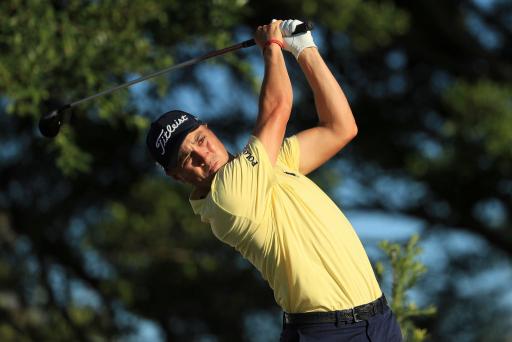 Justin Thomas drew the ire of some golf fans yesterday after he had a spectator thrown out of the Honda Classic for shouting “get in the bunker” after his tee shot on the 16th at PGA National.

Thomas, who went on to win the event via a play-off, was locked in a tight battle with Luke List at the time, and was playing for position off the tee coming down the stretch.

The 24-year-old immediately asked “who said that” after piping his iron shot down the middle of the fairway, before asking for the spectator to be removed.

@BarstoolTrent Justin Thomas just asked to have a spectator removed for rooting for his drive to go into the bunker. pic.twitter.com/RTXsgWHY09

"Just, again, I feel like there’s no place for that, and I hit it and my ball is in the air and it’s not – it’s in the middle of the fairway and he’s yelling for it to get in the bunker. I was like, okay, I’ve had enough. So I just turned around and asked who it was, and he didn’t want to say anything, now that I had actually acknowledged him. So he got to leave a couple holes early.

"I don’t want to kick someone out just to kick them out. It’s just it’s so inappropriate. We’re out here trying to win a golf tournament. I would have done it if he said it to Luke (List), just like Rory (McIlroy) did to the guy that said something to me at L.A.

"Just because you’re standing behind the ropes doesn’t mean that you can – I don’t care how much I dislike somebody, I’m never going to wish that kind of stuff upon them. I felt it was inappropriate, so he had to go home."

Last week Thomas said some US golf fans were getting out of control, which drew criticism from some sections, and he touched on the issue before the Honda Classic.

“It’s those certain fans that are choosing to yell at the wrong times or just saying stuff that’s completely inappropriate. There’s really no place for it anywhere, but especially on a golf course, which is I feel like golf is pretty well known as a classy sport.