WATCH: Tiger Woods' most epic hole-in-one at the 1997 Phoenix Open

One of the most spectacular sights in PGA Tour history came at TPC Scottsdale some 23 years ago... 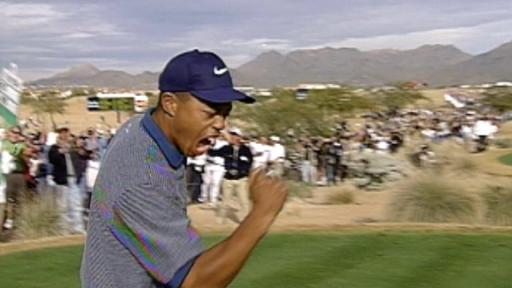 Tiger Woods has played many scintillating shots in his PGA Tour career, but his hole-in-one as a fresh-faced 21-year-old at the 1997 Phoenix Open will go down as one of the all-time greats.

As Woods sent his ball into the air at the famous par-3 16th hole at TPC Scottsdale to cries of "get in the hole", the crowd soon sent the decibel levels to an unprecedented high when his Bridgestone ball Nike ball found the bottom of the cup for an ace...

Tiger’s famous hole-in-one at the 16th hole during the 1997 Phoenix Open.

A post shared by Vintage Tiger Woods Moments (@vintagetigermoments) on Nov 3, 2019 at 10:18am PST

Woods has had a total of 20 holes in one during his career, but only three in PGA Tour competition - 1996 Greater Milwaukee Open, 1997 Phoenix Open and 1998 Sprint International.

The now 15-time major champion incredibly had his first hole-in-one at the age of six.

Woods is not playing in this year's Phoenix Open but will return to the PGA Tour at the Genesis Open from February 13 to 16.

The World No.6 finished tied ninth at the Farmers Insurance Open last week.

Rickie Fowler defends the Phoenix Open this week but he will have a tough task to go back-to-back with tournament favourite Jon Rahm - who finished second last week - in the field.