Well this could have gone better... 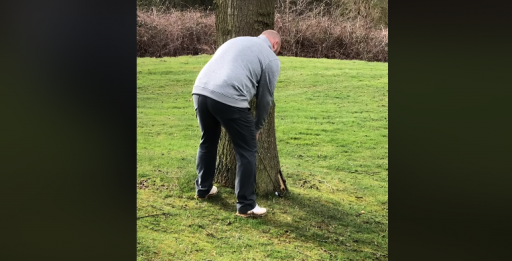 So you've just sent your golf ball flying over the back of the green and you walk up to find it resting against a tree. That was the unfortunate situation facing a GolfMagic reader recently, and sadly for him, things went from bad to worse in a heartbeat.

"Just watch you don't knock the tree down," said the playing partner, as the golfer in question stepped in to play a rebound shot off the tree and back into play.

In all fairness, it wasn't the tree he needed to watch!

Watch what happened next in the video below:

"Triple hit," said one of the comments in our thread to this video.

"He'd better check it's still a two ball," said another.

Thankfully for the golfer in question, there is now no penalty for a golf ball accidentally hitting you on the way through - like it did.

No doubt he was already in enough pain so the thought of a one-stroke penalty would have only compounded things even more.

11.1 - Ball in Motion Accidentally Hits Person or Outside Influence

a -  No Penalty to Any Player

If a player’s ball in motion accidentally hits any person or outside influence:

- There is no penalty to any player.

- This is true even if the ball hits the player, the opponent or any other player or any of their caddies or equipment.