Why Rose's Olympic win means so much more than gold 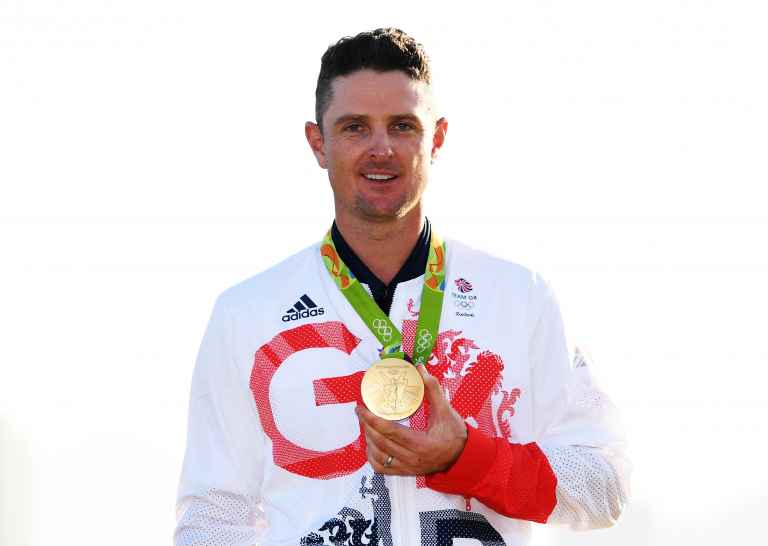 Justin Rose provided the perfect pitch at the Olympic Games, and not just with his third shot to the 72nd hole.

Rose, who ousted Sweden's Open champion Henrik Stenson to win one of Britain's five Rio gold medals on Team GB's greatest ever day at an overseas Olympics, savoured every moment of golf's 112-year return to the Games of the XXXI Olympiad.

Arriving in Rio a week prior to his opening tee-time on Thursday, just as he would for a major, Rose was one of a handful of players in the men's golf field who just "got" what this great sporting event is all about.

While Rose's social media accounts are typically livelier than a 100m Usain Bolt sprint most weeks, Rose embodied the Olympic spirit by posting videos and images of him mingling with fellow Team GB athletes, including flagbearer and tennis ace Andy Murray.

He even made time to sit in on the BBC's swimming studio to cheer on his compatriots and give a pro golfer's take on the Games.

Unfazed by the Zika virus, Rose came to Rio because he wanted a gold medal to accompany his 2013 US Open title. He wanted the world's best who turned down their invites to regret it. He wanted to be there because it was a "once-in-a-lifetime" opportunity.

Yes, Rose, a seven-time PGA Tour champion, has beaten bigger and better fields in his career, none more so than when displaying nerves of steel on the final hole at Merion Golf Club three years ago, but it was clear for all to see what this latest triumph meant to him as he unleashed a roar and Tiger-esque fist pump to the crowd.

"I've been so into it [Olympics]. I've been so up for it," said Rose, who sealed the gold medal when pitching up from inside of 50 yards to two feet for the winning birdie-four, as he watched Stenson three-putt from 30 feet for a bogey-six.

"I've just been so determined to represent Team GB as best as I could, and it was just the most magical week."

While Team USA's Bubba Watson and Rickie Fowler were others who appeared to be embracing golf's return to the Games by hanging out with the American swimmers, it was Rose who was the one who talked the talk, and walked the walk for the majority of the week.

He even threw in the first hole-in-one in Olympic golf history for good measure, when sending a stunning 7-iron into the cup at the fourth on Thursday afternoon.

It's a dream come true. I've been thinking about Rio for a long time.

Little more than 18 years may have passed since a fresh-faced 17-year-old burst onto our television screens when holing an approach to the final hole of the Open at Royal Birkdale, but Rose, now 36, is not just manfully representing his nation, but golf in general.

Back then, winning major championships was all Rose was after. But as soon as golf became apart of the Games, Rose was as eager as anyone to play his way into the Great British side come the summer of '16.

IN THE BAG: JUSTIN ROSE

"I’ve been thinking about Rio for a long, long time. I’ve been dreaming about coming here for a few years now. I was hoping my ranking would allow me to compete in the Olympic Games.

Yes, in every Tour pro's heart of hearts, Olympic golf is never going to mean as much as winning the Open, the Masters, US PGA or US Open, something Rose has already done, but golf was given a chance to impress the world and show unfamiliar youngsters what the sport is all about.

Participation numbers in world golf continue to dwindle, slow play continues to turn noses away, and the golf equipment business is hardly booming right now. Just ask Nike Golf, who recently revealed it will no longer be making golf clubs, balls and bags.

The game is in need of a boost. Yes, lots of different bodies are getting involved with promoting shorter forms of the game, and rightly so, but there is no bigger stage than the Olympics with which to showcase and "big up" golf to the masses.

The point of the matter is that Olympic golf has been put on a tee peg ready for the world's best to do what they want with it.

Many players had to back off their shots due to crowd disturbance (Photo: Getty Images)

Rio was, and still is, very new to golf.

That was evident in the amount of times a golfer had to press the reset button when a mobile went off, a camera was clicked or a voice was muttered mid-swing outside the ropes.

A couple of spectators even went to pick up golf balls.

Gil Hanse was brought in to design just a third golf course in the region, specifically built to stage an Olympic event, and Brazil's lone hope in the field was little-known Adilson da Silva, who mixes his golf between the European Tour and South Africa's Sunshine Tour.

Rory McIlroy was more than happy with his decision not to compete at the Olympics (Photo: Getty Images)

Throw in a depleted field that included just eight of the world's top 20, with the likes of Jason Day, Rory McIlroy, Jordan Spieth and Dustin Johnson choosing to bypass the tournament over concerns over the Zika virus, and you would be forgiven for thinking this was just any old event on the calendar.

A fair comment, but still an unexpected one given his poster boy image and current high status in the game.

Asked what events he would watch at the Olympics, McIlroy even failed to include golf: “Probably events like track and field, swimming, diving, the stuff that matters.”

On paper, the tournament had serious questions to answer for welcoming golf back to the Games, but it did, and it came through them with colours brighter than the Brazilian flag.

A number of golf's star names may have binned their invites to Rio, but the ones that remained in the field thankfully delivered.

Many critics of the 60-man field had written it off before it had even started.

Some criticised its "unoriginal" individual strokeplay format, while others called for some sort of team format like we see in the World Cup event.

A few even said, rather tongue in cheek, it would do well to make the red button, which it actually did.

From a British golf point of view, however, it was a great shame to see the final round fail to make the main channels. Perhaps that provides the biggest indicator of all as to how golf is currently being perceived this side of the pond.

I wonder had Tiger Woods been in contention for a gold medal whether the story would have been any different? Probably not.

What interested spectators there were in Brazil, however, flocked to the Olympic Course in their thousands.

There was not just home support on show, but Swedes, Brits, Australians, and many others. It was a sell out, or so we're told.

There were even raw displays of emotion, depicted none better than when da Silva tapped home for par at 18 to finish tied 39th.

"To have this crowd like this, supporting you, staying behind you even when you’re not playing too well. It makes such a big difference," said da Silva, who became emotional as he circled the 18th green after finishing his round with a Brazilian flag.

When electronical devices weren't being used outside the ropes, the fans behaved themselves well and appeared to appreciate good shots.

They even adapted quickly to the phrase "Kooooch" midway through the final round as Team USA's Matt Kuchar stormed home in 63 shots to take the bronze medal.

Rose's birdie to Stenson's bogey at 18 sealed the gold medal on 16-under (Photo: Getty Images)

But as a competition and Olympic golf event, thankfully Rose and Stenson stepped up to the plate and presented the tournament with the finish it richly deserved having been absent from the Games since 1904.

Rose and Stenson were engrossed in a ding-dong battle for much of the weekend and it fittingly came down to the 72nd hole with the pair locked on 15-under, before the crucial two-shot swing emerged in a battle of pitch and putt.

For Rose, the atmosphere was comparable to what is about to come at Hazeltine next month, but distinctive at the same time.

"The atmosphere was more like a Ryder Cup than a major but it’s more unique than either of those two," said Rose, who will compete in his fourth career Ryder Cup in September.

"You can’t compare it to anything else."

Despite his heartache at the final hole, Stenson is taking consolation from the silver medal around his neck.

"To call yourself an Olympian is something very special," said Stenson, who tied the 72-hole major record of 20-under at the Open last month.

"To be an Olympic medalist is even more special. I’m very pleased that I went here. It was the experience of a lifetime."

Even bronze medalist Kuchar was forced to pinch himself at the prospect of standing on an Olympic podium for the first time.

"I’ve never been so happy with a third-place finish in my life," said Kuchar.

"I have an amazing sense of pride."

Rose believes golf has shown what it can offer the Olympics following a successful week in Rio (Photo: Getty Images)

Golf has been given a major chance to shine on the world stage, and it will get another shot to do so in 2020 at the Tokyo Games.

Has Rio done enough to persuade the world's best to tee it up at Kasumigaseki Country Club for a gold medal in four years time? Maybe.

Has Rio done enough to persuade the International Olympic Committee that golf deserves a future place on the Olympic roster? Maybe.

Time will tell on golf's future at the Games, but Rose has been there, seen it, done it. He's even got the T-shirt.

"Anybody making the decision I’d ask, were you in Rio on Sunday?"

Now even Rose's TaylorMade wedge would be proud of that pitch to the IOC.