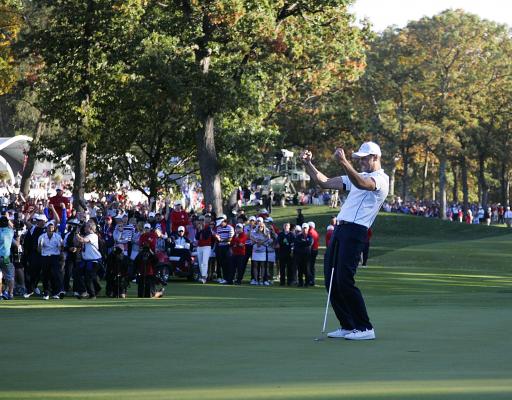 Practising your putting can be boring and unproductive or it can be exciting and an inspirational, if it’s done correctly and with a little imagination.

I see many golfers wander on to the practice putting green with two or three balls and nonchalently roll the ball up to the hole and move on to another target. Ask them what they’ve learned from this mind-numbing drill and they probably couldn’t tell you.

Basically they’re only killing time before they’re due on the first tee but they are wasting the opportunity to pick up shots early in their round.

The key to productive putting practice is to create routines, which have an element of competition. This way you keep your mind and your method sharp so that when you come to the first green your practice drill is fresh in your mind.

You’re looking for feel and distance control. You’re not looking to hole everything – save that for the course – but establishing a routine and a repeating action is important.

There are many competitive games you can set yourself on the practice putting green and one that works for my pupils is to start with four, five or six balls and putt from the one position to a different hole with each ball.

It might also be a good idea to go through your pre-putt routine as you would before each putt on the course, marking the ball, re-spotting it, checking the line and your alignment and rolling it toward the hole.

See how many you get to within half a putter length – that’s equivalent to a gimme or conceded putt that you’d expect to hole nine times out of ten.

Keep practising this until you regularly get all within the desired distance and you will soon gain more consistency and eliminate those three putts.

If the practice green is crowded, stick a couple of tees in the ground roughly the width of the hole apart and putt to those. The putting green is a place to hone your skills, not to waste valuable preparation time.

Unlike most of the world’s best known golf coaches John Cook has dedicated his coaching career to teaching juniors to become Tour players and amateur players to become better players.

For more tips check out the rest of the masterclass series