Dustin Johnson brought to tears during his Masters winning speech

Johnson gets very emotional after winning The Masters for the first time in his career... 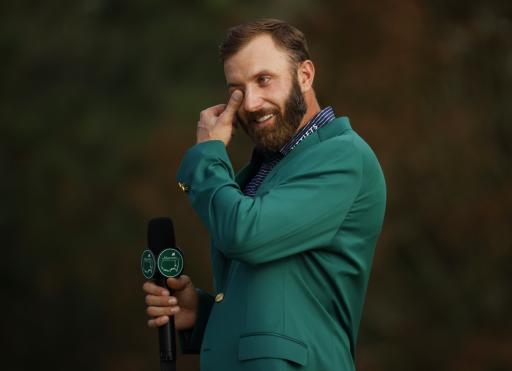 Dustin Johnson might be known as one of the most laidback golfers on the planet, but even a first Masters victory was enough to bring the giant American to tears at Augusta National on Sunday.

Johnson, 36, smashed the 72-hole hole record at The Masters with his 20-under total and then revealed just how much this victory means to him after receiving his new Green Jacket from last year's champion Tiger Woods.

"This is just a dream come true, as a kid, I always dreamed about being a Masters champion," said an emotional Johnson.

The World No.1 added: "I've never had this much trouble trying to gather myself. On the golf course, I'm pretty good, but out here I'm not. I have a great team who... Jesus, I can't even talk!"

Johnson, 36, carded a final-round 68 to finish the week at 20-under par and four strokes clear of Cameron Smith and Sungjae Im.

The World No.1's four-round total eclipses the previous record of 18-under par set by Woods in 1997 and Jordan Spieth in 2015.

Johnson's victory marks his second career major title to go alongside his 2016 US Open triumph at Oakmont.

The American's five-stroke margin of victory is also the biggest since Woods won by 12 strokes in 1997, and his 11th straight round under par at Augusta breaks the previous record of Woods (10).

On top of owning the new 72-hole scoring record at Augusta National, he also posted the fewest amount of bogeys of any Masters champion with just four. The previous record was just five, which had been set by five players.