Watson, Oosthuizen and Westwood all perform for the Arizona brand 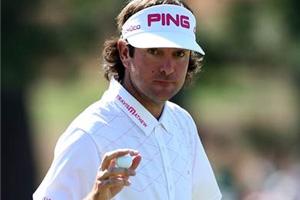 In this finicky game, it's hard enough hitting it straight, let alone trying to curve balls in ways not dissimilar to David Beckham and Roberto Carlos bending free-kicks around a wall of players.

Seemingly out of the running for The Masters, after carving his tee shot into the woods on the demanding 10th hole, the big-hitting American,  still roughly 155 yards from the green, hooked his the ball 40 yards around trees and undergrowth spinning the titleist ProV1x ball to within ten-feet of the pin.

“If I have a swing, I have a shot,” explained Watson, newly-promoted to World No.4.

Two putts later, Florida-born golfer had his first major title, falling tearfully into the arms of his caddie, his mother and other family and friends.

But it wasn’t just those on the green that were wiping away tears as club-maker PING was celebrating its most successful major in the brand’s 53-year history.

“It was a great weekend for the PING family, and for Bubba’s new family in particular, and we couldn’t be happier for them,” said the company chief executive John Solheim.

“Bubba’s had a number of high finishes this year and now he wins his first major and is ranked fourth in the world," he said.

“He will be a very popular champion and very deserving. Louis and Lee can be proud of their performances, and Louis’ double-eagle was truly amazing - a rare moment in history that will always have a connection to PING.”

Watson, whose game caught fire on Sunday’s back nine with four straight birdies on holes 13 through to 16, found 73.6% of the greens in regulation with his customised PING S59 irons ranking 13% better of than the tournament's average.

Despite finding only 66.1% of fairways, the PGA Tour’s biggest hitter was rarely in too much trouble with his customised pink G20 driver. And when he did miss, most notably on the second extra hole, he remained undeterred.

The 33-year-old will receive a solid-gold replica of the putter head and two gold-plated replicas of the putter will also be made – one for Bubba and one for the traditional PING vault at its headquarters.