In the Bags: Kenny Perry and Fred Couples 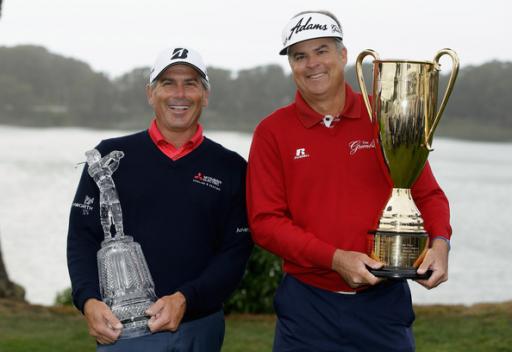 Perry, who finished tied fifth on 10-under in the season finale and seven shots behind Couples, led the tour with three victories, taking the Senior Players Championship and US Senior Open in consecutive tour starts and winning the AT&T Championship last week in San Antonio.

"It's been a magical season," said Perry, who was accompanied by his wife, three daughters, their husbands and a couple of grandchildren.

"This is my highest accomplishment. I've been close to winning a major on the PGA Tour and to finally win a few this year, it's the things dreams are made of."

Couples ended a 16-event winless streak dating to the Senior British Open in July 2012, closing with a 2-under 69 for a six-stroke victory over Bernhard Langer, Peter Senior and Mark O'Meara.

The Hall of Famer has nine victories in four seasons on the 50-and-over tour after winning 15 times on the PGA Tour.

"It's great to win. It seems like four years ago," Couples said. "Now I have 60 days to lose all my momentum."