TaylorMade screens Outside The Ropes film

Go behind the scenes with Justin, Dustin, Sergio, Darren and Camilo 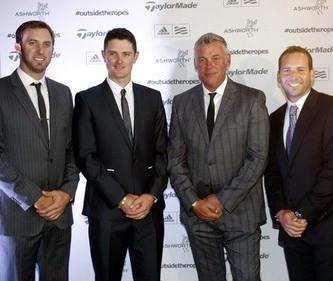 The film, which broadcasts on Sky Sports tonight, goes behind the scenes with the five TaylorMade players to examine what it takes to play this game at the highest level.

From diet to meticulous physical, psychological and technological preparation, the reality for top players in the modern era is that the game is much more than simply four tournament days; it’s sweat, toil and sacrifice seven days a week.

Outside The Ropes confronts the traditional stereotypes of the game, as Justin Rose explained.

“A golfer’s life outside the ropes is all about discipline, dedication, drive and hunger. Gone are the days when you just turned up and played,” said the TaylorMade staffer.

“Golf as a sport has changed; we are now athletes and the minor details in preparation can be the difference between major success and failure.”

“Outside The Ropes reveals the changing face of golf in a truly unique way and showcases the dedication of our staff players and the pivotal role that we, as leaders in innovation, can play in helping them achieve their goals.”

TaylorMade Outside The Ropes will be broadcast on Sky Sports 2 tonight at 6.30pm and 10pm, and periodically throughout Wednesday.

Stay tuned for the exclusive Golfmagic interview with Justin Rose tomorrow. Follow @Golfmagic and join us on Facebook for all the latest Open Championship news.