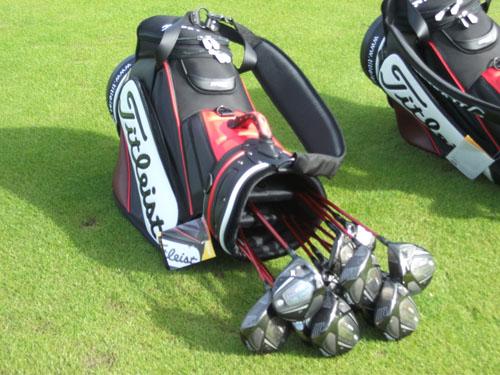 Titleist is introducing a 12-degree version of its 910 D2 driver, especially for golfers with moderate swing speeds.

The model was introduced this week at a launch seminar at Archerfield Links when I had the opportunity to try the clubs - albeit in testing 40mph conditions - as the tail end of Hurricane Katya swept through Scotland.

Titleist's US-based general manager Steve Pelisek explained that the new model was part of the company's determination to expand its brand beyond that of merely 'the serious golfer' with a high swing speed.

"It's no secret the Titleist brand is most popular with players with higher speeds," he told me "and taking the average statistics of avid golfers around the world,  the player who buys Titleist is five years young than the average golfer, regardless of what market you're in.

"So their swing and ball speeds are higher. However, we do think we have an opportunity to reach deeper into the serious golfer market and one of the best opportunities is to communicate the fact that our product line is very playable."

He admitted there are, what he described as 'distance-challenged player' who want distance as well as 'playable trajectories,' which is why Titleist decided to further investigate the benefits of more loft and lighter shafts for players with moderate swing speeds, especially seniors, juniors and women golfers.

"There's a relationship between ball speed and swing speed," he said. "It's usually about a 1.5 ratio when we're talking about drivers - so a 100mph swing speed equates to about 150mph ball speed.

"The 12-degree will spin more, launch higher and travel about four yards further."

Recommended retail price of the new 12-degree Titleist 910 D2 driver is around £250.

Golf news
Tiger Woods' 'TIGER SLAM' irons sell for over $5 million at auction
Equipment
Best golf balls as played by PGA Tour players at The Masters this week
Wedges
THIS is What Happens at a Titleist Vokey SM9 Custom Fitting
Equipment
Vice Golf produce some of the BEST golf balls in the World!
Equipment
The BEST golf balls for under £40 at Scottsdale Golf!