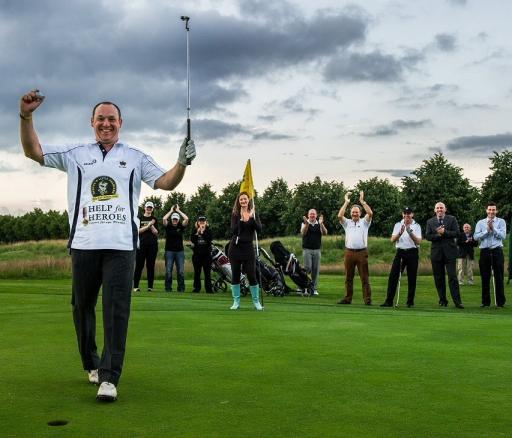 British Army Captain Stuart Ball has set a new unofficial world record of playing 432 golf holes on foot in five days in order to raise money for children who have lost parents in the forces.

By playing 24 rounds in a single working week with two wireless SkyCaddie SGXW units to ensure he wasted no time finding a correct yardage, Capt. Ball beat his original target of 360 holes by 72 holes.

“It’s fantastic to have achieved what we think is a world record,” said the 32-year-old from Odiham, who used his trusty TaylorMade Burner 2.0 6-iron more than 1,000 times.

“But it means nothing unless people donate to Scotty’s Little Soldiers and also to Help For Heroes.

“I have two young children myself, so Scotty’s Little Solders is very close to my heart. They are doing amazing work to help families who have lost loved ones on the front line.

“My own wife Debra, who has been incredibly supportive throughout, feels the same as I do about Scotty’s, and the love of your family is what keeps a soldier going – whether on the front line, or doing something like I have just done.”

Capt. Ball, an officer in the Royal Logistic Corps, ignored pain from blisters and an injured left knee to play the final round at Hampton Court Palace GC accompanied by high-ranking Army officers and other friends and supporters, before finishing in darkness at 21.15.