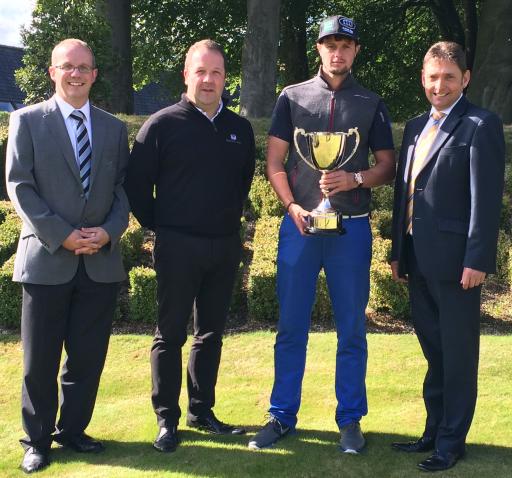 The 28-year-old EuroPro Tour player, who resides at De Vere Club & Snainton Golf Centre, carded a final-round 66 to finish a shot clear of Renishaw Park's Michael Ramsden on 7-under.

Before winning the 2014 PGA Manchester Open, Belt had already notched up an impressive CV of course records and tournament wins putting him in pole position for the 2014 Michael Slater PGA Order of Merit.

His victory meant he increased his lead in the Order of Merit to 295 points over Mossock Hall’s David Shacklady, who was defending his title in Manchester.

As well as the Manchester Open, Belt recently won the PGA Assistants OOM, PGA North Region Championship, Spanish Hi 5 Pro Tour as well as notching up 5 holes in one.

Belt said: “It’s a great feeling to have come through to win the Manchester Open, especially considering how strong the field was. Worsley Park offers a true challenge with long drives, tight fairways and well placed bunkers that always threaten your round.

“It was really close all the way to the18th where I was able to birdie the last to take the title outright. I can’t wait to come back to defend my title here next year.”

The event was held over two days of Stroke Play with the field of 130 being cut to just 40 the second day of play. As one of the biggest regional PGA events in the country, it is only open to professional golfers, attracting the best up and coming talent from the North West who battle it out for honors and a share of the £8565 prize pot.

Director of Golf at Worsley Park, Adam Moule, said: “It was an honor to host the Manchester Open for the 6th year with the region’s best professional talent being given real test over our championship layout.”

North West regional secretary for the PGA, Graham Maly, added: “On behalf of the PGA in England & Wales (North), it was a great pleasure to return to the Worsley Park Marriott Hotel & country Club for the 2014 Manchester Open.

“The Manchester Open has grown from strength to strength and is now widely acknowledged across the PGA North as one of the biggest Order of Merit tournaments in the region with the leading three professionals at the end of year given the opportunity to compete in the 2015 BMW PGA Championship.

“On behalf of the Professional Golfers’ Association, I would like to take this opportunity to thank General Manager Derek Harvey, Director of Golf Adam Moule and Marriott Worsley Park for their continued support of the PGA in England & Wales (North) and this magnificent event. The PGA North and Marriott Worsley Park have developed an excellent relationship, which has been enjoyed by the professionals and amateurs of the Region and County, and long may it continue.”