Clinton dressed to thrill at Pro-Am 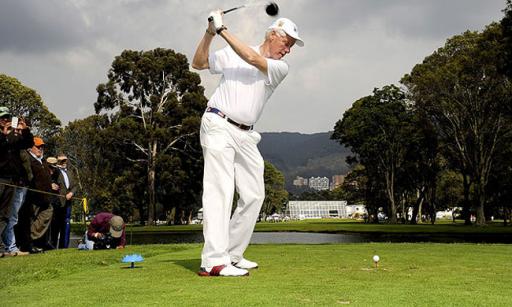 Bill Clinton became the first current or former US President to take part in a Tour event Pro-Am when he teed up at this week’s Pacific Rubiales Colombia Championship on the PGA Nationwide Tour.

Dressed in white with a stars & stripes belt buckle and red, white and blue adidas golf shoes, Clinton partnered Colombian President Juan Manuel Santos, who had to dash off to a meeting after six holes, and DJ Brigman, chairman of the Nationwide Tour Player Advisory Council who revealed that he was frisked on the way to the first tee!

Clinton allowed himself a couple of mulligans when he miss-hit tee shots but proved an enthusiastic partner during the 16 holes they completed, said Brigman.

“I was pretty calm when I found out last Friday but then I got a little frazzled by security walking to the first tee today,” Brigman said.

“He was a great guy. It was such a memorable experience.”

Before starting, Clinton, who served as the 42nd President between 1993 and 2001, had to dump a few clubs to reach the 14-club limit - including a specially made driver that was presented to him earlier this year.

But he played tidily, according to reports, and nearly holed a shot with a hybrid for an ace on the long, par-3 12th.

Before he left for his flight to New York, Clinton told Brigman: “Now that you’ve gotten rid of the politicians, you can focus on the golf tournament!”