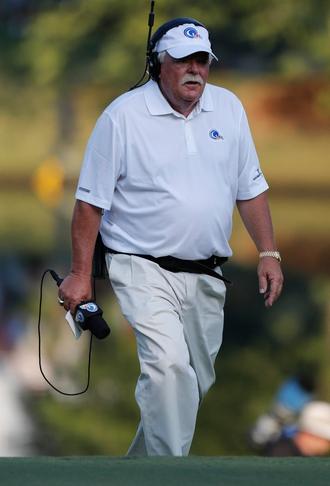 THE DRIVER of on-course commentator Roger Maltbie's golf cart during the US Open is facing four charges after hitting a state trooper while out on Pinehurst No.2.

The trooper said Lineberry, who had the job of driving Maltbie around the course to get him in position for the next shot, ignored instructions to stay put, then hit the officer with his golf cart.

The incident happened during the third round on the 11th hole when Maltbie was walking with the final group of eventual US Open champion Martin Kaymer and Brendon Todd.

An Associated Press reporter who witnessed the incident heard Lineberry tell the trooper, "I'm supposed to get the cart to Roger."

"When a state trooper tells you to stop, THAT'S what you're supposed to do," the trooper responded, inches from Lineberry's face.

The trooper was holding traffic behind a walkway as the players teed off on the 11th hole.

He told Lineberry that the cart struck his leg. The trooper asked for any the names of witnesses, and three people in the gallery immediately handed him their business cards.

The trooper ran after and then collared Lineberry, quickly placing him in handcuffs.