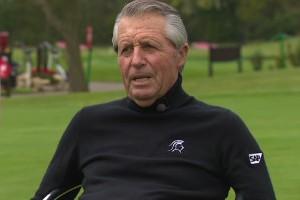 If you don't want to see Gary Player pose nude, please look away on July 12.

At 77 years young, the South African golfing legend with nine major titles to his name, will appear in all his glory in ESPN The Magazine's Body Issue where athletes pose naked for the magazine.

Player tweeted: 'After a lifetime dedicated to health and fitness I'm chuffed to be in ESPN magazine's Body Issue to hopefully inspire others to workout and live well.'

Player will become the oldest athlete to appear in the special issue and join fellow others in doing so in the past, such Sandra Gal, Christina Kim, Suzannn Pettersen and Camilo Villegas.

When Golfmagic caught up with The Black Knight at Golf Live last season, he explained to us how he does 1,000 sit-ups per day!