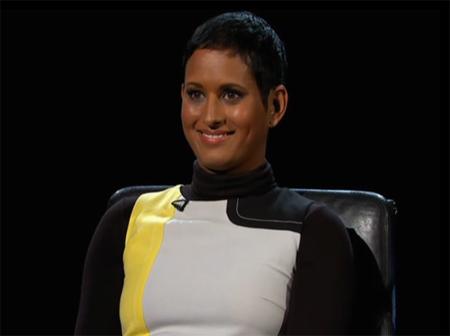 Who among us could not be impressed by the performance of BBC news presenter Naga Munchetty in winning Celebrity Mastermind with her knowledge of the beautiful game?

Naga, who lives with husband James in Hertfordshire, revealed her passion for the sport scoring an impressive 12 points with her knowledge of the Ryder Cup Matches since 1979.

The 36-year-old sat in the hot seat and told presenter John Humphrys that she has a handicap of 11, plays at least five times a week (“I have very early hours. I finish work at 8, put the waterproofs and straight out on the course”) and admits she would love to take up the game professionally (“it would be my dream job”).

When asked what it was about the game she loves so much, she replied: “It teaches you not to lose your temper. And it’s a game which you play against the course – so it’s a very mental game, as well as requiring precision and skill. You have to keep practicing; you’re never going to beat golf.”

Naga, who plays at Moor Park where this year she won a five-round county scratch competition over three days, is currently in training to take part in the 2013 London Marathon (sore feet?) and could be another specialist presenter like Clare Balding, this time giving a welcome fresh face to TV’s golf coverage.

Can you match Naga’s hot score? Here are the 12 questions she was asked:

1. Whose victory over Curtis Strange in 1987 ensured Europe returned from America with the trophy for the first time? Ten years later he captained the team on home soil.

2. Which Scot was unbeaten in his eight singles matches between 1991 and 2006, winning six?

3. In 1987 Jack Nicklaus captained the American team at which course that he himself had designed?

4. What four-word nickname is commonly given to the 1991 Ryder Cup on Kiawah Island in South Carolina?

5. On which green did Justin Leonard hole a putt in the 1999 singles which resulted in most of the American team running across the green to celebrate before his opponent could putt?

6. Each Ryder Cup consists of matches in three formats – singles, fourballs and which other where players take alternate shots with just one ball per team?

7. In 1993 who partnered Seve Ballesteros in three matches all against the same American pairing of Davis Love and Tom Kite?

8. In the 2012 Ryder Cup which American player lost all of his matches except for a half in the final-day singles?

9. In 1989 Tom Kite beat Howard Clark by what score to set a record for the largest margin of victory in a singles match that was equalled by Fred Couples against Ian Woosnam in 1997?

10. Who has played a record 43 matches for Europe in ten appearances in the Ryder Cup?

11. Who has been the top point scorer for the European team at each of the last three Ryder Cups?

12. The 1981 Ryder Cup was moved from The Belfry to which course in Surrey?

How do you think you got on? Click here to see the answers. Let us know how you fared in the forum below and on our Facebook page. You can also tweet us @Golfmagic.