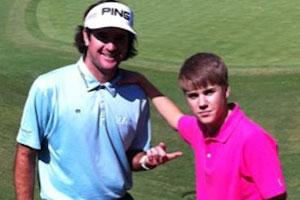 Pop sensation Justin Bieber is understood to have turned to golf in a bid to ‘focus his mind’ away from the madness surrounding his arrival in the UK.

The 18-year-old Canadian singer, who touched down in London to promote his new album earlier in the week, is believed to have booked trips to a golf simulator to spend time away from his over-zealous fans.

“Justin is mad on golf and has a brilliant swing. It focuses his mind,” a source told The Sun.

“He’s had a lot of madness surrounding him from fans since he landed in Britain, so he booked time at an indoor golf simulator yesterday to relax.”

Bieber, who plays off an eight-handicap, also has a close relationship with Masters champion Bubba Watson. So close in fact, he called Watson up for a chat just moments after he slipped on the Green Jacket.

“Justin was the only person I talked to on the phone after I won,” said Watson.

“He called me and I talked to him on the phone and he and Selena Gomez were congratulating me, and it was a big honour that they would both call me and talk to me.”