Lawrie joins the 500 Club in Spain 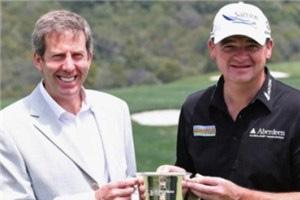 Paul Lawrie embarks on his 500th European Tour event this week when lining up at the Volvo World Matchplay Championship at Finca Cortesin in Spain.

The 1999 Open champion, who received an engraved ice bucket to mark the milestone, joins an illustrious group of players to have reached the exclusive 500 including Colin Montgomerie, Ian Woosnam and Tour record-holder Sam Torrance (706 appearances).

“I can see me getting to 600 appearances now,” said Lawrie.

“To get to 700, where Sam is at, is a huge number. Playing for 40 years is just an incredible record.  I think we'll leave Sam at the top for a while.

Lawrie, who made his European Tour debut 20 years ago in the 1992 Asian Classic, smashed the €10million career earnings mark earlier this season when securing his seventh Tour title with a four-shot victory at the Qatar Masters.

And having recently risen to a current World No.41 following his recent renaissance in the game, which included ending his nine-year winless drought at the Open de Andalucía at the end of last season, the Scot is targeting a return to The Ryder Cup at the age of 43.

“If I get into The Ryder Cup, it would be the biggest achievement of my career,” said the Scot, who's among  the automatic positions for Medinah.

“That’s the motivation. I really want to play on that team. It would be huge for me. I’m 43, but I feel like there is a wee bit left in the tank yet.”