McDowell: 'Rory and I are still good friends'

G-Mac says Rory will always be a mate 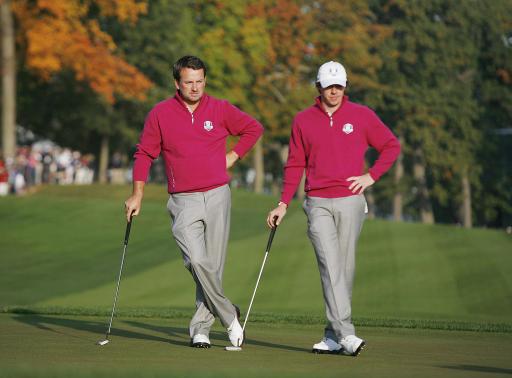 GRAEME MCDOWELL says he and Ryder Cup teammate Rory McIlroy are still close friends, despite some media reports to the contrary over the last few months.

But World No.11 McDowell says rubbished reports there had been a falling out between the two Northern Irishmen, and said he hopes to rekindle his partnership with the two-time major champion.

"Of course we're still friends," said McDowell, 34. "I'd love to renew my partnership at Gleneagles with Rory, for sure. A big goal for me in 2014 is to be on that team and I expect Rory McIlroy will be on that team.

"Would I like to be teeing off with him on Friday morning in the foursomes? Absolutely! I don't think captain [Paul] McGinley needs to worry about that relationship.

And McDowell also thinks the World No.6 has hit some form and expects him to challenge at the top of the leaderboard at the DP World Tour Championship in Duabi this week.

“If Rory won this week I wouldn’t be surprised,” McDowell said. “I obviously played with him in the first round in China and his game looks back to its best. This is a golf course he knows how to get around so I certainly wouldn’t be surprised to see him on the leaderboard.

“If you can drive the ball well, which has always been a staple of Rory’s game, you can set yourself up to attack these greens which are hidden away from you.

“And just feeling comfortable at a venue always helps. I have talked about my general discomfort on this golf course over the last five years. I can only assume that Rory McIlroy is pretty comfortable, having won around here in style last year.

“He’s the kind of player that, when he is on, he can win anywhere. I think he has the tools to get the job done. It is difficult to comment on anything else really, because I haven’t seen enough of him lately to know what he needs to change,or where his head is at.

"He has had a lot of distractions off the golf course this year, but his game certainly looks to be back to its best.”