Nine-year-old shoots round of 58! 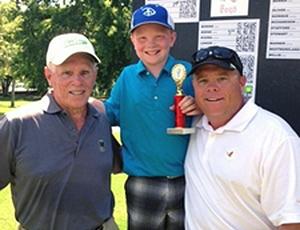 By the time I celebrated my ninth birthday, the thought of signing for something pretty decent was a love letter.

For a little lad from South Carolina, a round of 58 represented something slightly better.

Okay, I know what you're thinking. At least we were both chasing birdies.

Competing in the Mount Pleasant Junior Open at Patriot Points Links, nine-year-old Zach Adams, a rising fourth-grader, reportedly fired two rounds of 29 in the two-day event for an 18-hole score of 58. Zach's round featured three eagles and eight birdies.

Zach, unsurprisingly, finished 16 shots clear of his nearest competitor in the 8-9 Boys Division.

“It was pretty fun because I just kept on making putts and chipping it real good," Zach told The Post & Courier.

"The course was playing short and my putting was real good."

Sure, the course only measured a measly 2,680 yards but his round of 58 joins those carded by Ryo Ishikawa on the Japan Tour in 2010 and Shigeki Maruyama during a US Open sectional qualifier back in 2000.

Unfortunately for Zach, he was three shots off the lowest score ever recorded. Although the official PGA Tour record stands at 59 - Al Geiberger, Chip Beck, David Duval, Paul Goydos and Stuart Appleby, there are four rounds of 55 known to have taken place.

The earliest occurred way back in 1935 and was carded by EF Staugaard on the par-72, 6,419-yard Montebello Park course in California.

The second 55 was posted by Homero Blancas, who played on the PGA Tour in the 1960s and 1970s, and later on the Champions Tour.

In 1962, when he was an amateur and playing in the Premier Invitational in Texas, Blancas put together a front nine of 27 and a back nine of 28 for a round of 55. He had 13 birdies and one eagle, and used required 20 putts.

The third was known to have taken place in 2004 by Steve Gilley on the short par-71 Lynwood Golf & Country Club course in Martinsville. His 55, however, took place in a friendly round with two childhood buddies.

And the fourth was shot by young Australian pro Rhein Gibson last year at the par-71, 6,850-yard River Oaks Golf Club in Edmond.