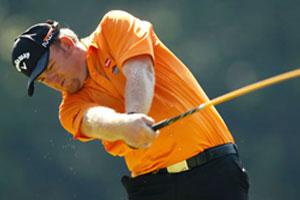 For the first time since 1980, when the PGA Tour began tracking driving distance, the 2011 Tour average has smashed the 290-yard barrier at 290.6 yards.

Out of the 186 players who teed it up on American soil this season, 21 of them bombed it past 300 yards on average, with the unofficial ‘Big Five’ measuring 310 yards or better.

Incidentally, Johnson crushed the longest drive of the season at 463 yards at the par-5 seventh at TPC Boston during the final round of the Deutsche Bank Championship. It was aided by the cart path, however, similar to ‘that drive’ from our very own Alex Perry.

Perhaps when Johnson returns from knee surgery, he will be able to make inroads into the world long-drive record set by Mike Dobbyn, who has previously smashed a jaw-dropping 551 yards.

Hardly surprising when you consider new technology is being pumped into drivers seemingly every season, on top of new faces, heads, shafts, colour specs and the TrackMan device. I can certainly vouch for that after visiting the Cleveland Golf/Srixon Centre of Excellence last month.

Looking back at driving statistics across the last 30 years in the United States, it’s interesting to learn that only six players led the way with average drives between 270-280 yards in 1980, rising to 27 by 1990.

In 2000, a total of 106 players had achieved that distance but came nowhere near John Daly, who took driving to another level. With a backswing that almost reaches his right foot, the Wild Thing became the only golfer to crack an average of 300 yards.

So let’s assess. Did powerful forearms and outrageous backswings really mean everything on Tour in 2011? In the 48 official events on the PGA Tour this season, 16 (a third) of those winners averaged 300 yards or more, while only two players who averaged less than 280 yards claimed two wins (David Toms and Kevin Na).

Last year, the only player to average more than 310 yards off the tee was Garrigus at 315.5 yards per measured drive, and now there’s five. It would appear that trend is only going to continue in 2012.

Can you drive it further than Brian Gay?