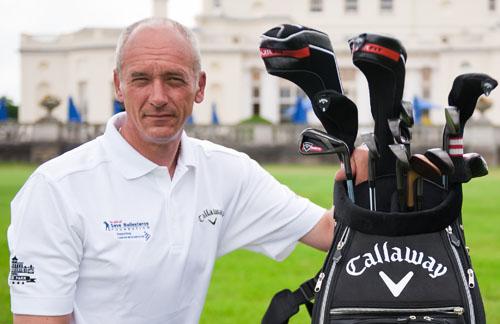 While many golfers will soon be making their way to Royal Lytham & St Annes for the 140th Open Championship, few will be walking.

Apart from Stoke Park Golf Club’s starter Paul Simmonds, who plans to walk the 200 miles over seven days to raise money for the Seve Ballesteros Foundation in aid of Cancer Research UK - and he’ll be carrying a Tour bag with a full set of clubs.

He will walk along mostly canal routes as he heads north, stopping for the night at various golf courses who have offered him food, refreshment and accommodation en route, including The Wentworth Club, The Oxfordshire, Banbury, The Belfry, Stoke-on-Trent, Warrington and St Annes Links.

Once at the Open, Paul will encourage every competitor on the practice range to sign the Callaway bag to be auctioned. Callaway will also provide a full set of clubs to the purchaser. He aims to raise £15,000 through sponsorship as well as a greater awareness for the Foundation set up by the iconic Spanish golfer to fund research into brain cancer.

Ballesteros finished second at Royal Birkdale Open Championship at the age of just 19 and went on to win it three time in 1979 and 1988 at Lytham and in 1984 at St Andrews.

“I always saw Seve as an inspirational golfer,” says Paul, “and his bravery against cancer was even more inspirational. I really wanted to take this opportunity to support what he was doing and raise money for a great cause.”