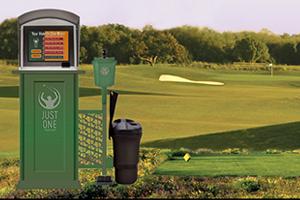 Recent research shows that almost one in four golfers admit to some form of gambling on the course, so a new scheme from JustOne Golf might prove an attractive proposition in the UK.

The Florida-based company is convinced its Teeosk idea - a combination of a hole-in-one prize and a charity fund-raiser - could catch on globally.

The brainchild of Steven Rattner, a co-founder of finance company Donaldson, Lufkin & Jenrette, JustOne Golf’s Tom Lynch explained that golfers can have the opportunity to place a wager with an opportunity to win anything from $20 to $1million.

“We install a Teeosk on a par-3 along with high definition cameras,” he explains. “A golfer can play a variety of golf games on impulse when they touch the screen and enter their registration and credit card details. They can play for as little as $5.

“If, for example you play for $10, you immediately get a free drink in the clubhouse and if you hit it your tee shot within the [length of the] flagstick, you lay the flagstick down and the cameras record that you’ve done it you get a coupon in the pro shop for a $20 credit.”

The scheme does not violate any state’s gambling laws. Lynch says the company has done its legal research. It’s a game of skill; not a game of chance.

Cameras used are similar to those used US Homeland Security and crime protection and each time a golfer plays a hole under the scheme, the action is taped and monitored.

What kind of stakes do you gamble for on the golf course? Do you think Teeosk could catch on worldwide to add a little spice to a game? Let us know in the forum below or tweet us @Golfmagic.