Top 10: pro golfers and their pastimes 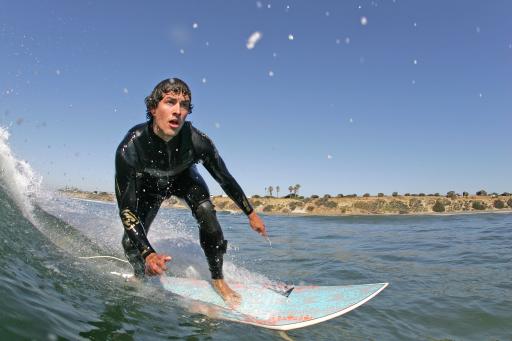 With pros taking longer than ever to play 18 holes, it's a surprise they find any time for hobbies.

But in between media obligations, practising, sponsorship duties and checking their Twitter feeds, the world's best do manage to indulge some other passions.

Golfers spend a lot of time trying to avoid water, but Tiger Woods does the exact opposite when he's not on the course.

The 14-time major champion is known to enjoy a spot of spearfishing, and can free-dive to over 100 feet, holding his breath for over four minutes.

"My whole deal is to go deeper and longer so I can shoot bigger fish," Woods told the Orange County Register. "I thoroughly enjoy shooting fish and catching lobster on the free-dives. But I want to go after yellowfin tuna. So I need to stay down a little longer.

"I usually cheat when I'm spearfishing. I use scuba instead of free-diving. But on scuba, the big tuna hear your bubbles and bolt."

It seems like every Australian knows how to surf, and 2013 Masters champion Adam Scott plays up to the stereotype.

Even when he suffered a knee injury in 2008, Scott still managed to suit up and hit the water - but he's hardly an adrenaline junkie.

"I know my ability in surfing," he said. "At some point you've got to take off on something, but I don't charge big waves....I'm not going out there to scare myself.

The "Belgian bomber" is a closet DJ, and can be found treading the floors of the world's biggest dance music festivals when not playing golf.

"I've always been into music, and the music I liked to listen to was in clubs," he told Golf Digest. "I always knew I had a rock-and-roll side in me, but when you're in Brussels doing the underground thing, you find yourself in very odd places at times."

It's well known the Irish enjoy a tipple, so there were no surprises when Graeme McDowell announced he was launching a golf-inspired beer.

The brew is called "Celtic Pale Ale", and comes under the brand GolfBeer Brewing Company, which also has American Keegan Bradley and Swede Freddie Jacobson on the books.

McDowell, who owns the Nona Blue Tavern in Florida, said: "For me as a golfer and a restaurant owner, GolfBeer is the perfect marriage, bringing together two of my favourite things."

Jimmy Walker is the resident astro-imager - or space photographer - on the PGA Tour, and has a dedicated observatory in New Mexico.

The American's childhood love for astronomy was reignited when he bought a telescope a few years ago, and now he says he's constantly asked for pictures and postcards by fellow pros. He has even had work included in Nasa's prestigious astronomy photo of the day gallery.

“Golf is my job and I continue to try to get better and better each year. I try to take that into imaging,” he explained. “I'm competitive and I try to be really good at it. I work hard, and I practice hard. It's my whole upbringing, being competitive and wanting to be the best.”

Former world number one Luke Donald is an artist on the golf course and off it.

Donald, who majored in art theory and practice at Northwestern University in Chicago, says the subject helped his golf game.

"People often use just one side of their brain, but I'm able to use both sides - the artistic and the logical side," the Englishman said.

Donald prefers to paint rather than draw, and says his work has a "certain amount of abstraction".

His doctor took him to the "Augusta of fly fishing spots", the River Test, and his love for fishing was rekindled.

“I find fly-fishing completely engrossing. I love the tranquility, the sound of the river," he explained.

"When you come upon a rising trout that’s picky and you have to try six different fly patterns to get him to take, 30 or 40 minutes will fly by, and that fish has had your complete attention. When you’re fishing, you’re not clock-watching. You get lost in time.”

Garcia may be a full-time member of the PGA Tour, but the Spaniard still finds time to turn out for his local side CF Borriol in Castellon.

The avid Real Madrid fan is also in business with Borriol, who play in Spain's third division, and was instated as the club's president.

"As any good Spaniard will tell you, we love football. Sport in general in Spain has been great for the last 10 years or so, but football has been great with the Euro Cups (wins in 2008 and 2012) and the World Cup (in 2010)," Garcia said.

Gary Player runs his own stud farm in South Africa with the hope of raising race-winning horses.

"We've had a lot of success I'm happy to say," the nine-time major winner said. "I'm the only South African to have had a horse run in the English Derby - it finished second in the St Leger, the oldest classic in the world, probably, and then went to America and won a Group One event.

"They say the outside of a horse is good for the inside of a man. If you see your horse win...it's like one of your own children."

The farm, which is hundreds of acres, also grows alfalfa, corn and oats and raises cattle, sheep, goats and wild animals such as wildebeest, waterbuck, gemsbok and impala.

All in all, there are three fishing boats stored in the yacht, a diving boat, a rescue boat, and four Yamaha Waverunners. He sold the vessel in 2004, however.

As a globe-trotting Tour player, South African Ernie Els has tasted some of the best wines on the planet, and he set about making his own batch in 1999.

The "Big Easy" began production in Stellenbosch, in the heart of his homeland's wine growing region.

The area enjoys a climate similar to the Mediterranean, but it benefits from no frost and little rain in harvest season, making it a low risk growing area.

"Wine is like golf - in both endeavours nature has the last ruling," the three-time major champion said.

Compatriot Gary Player also makes his own claret, as does Englishman Luke Donald, who grows his grapes in California's famed Napa Valley.

If you follow Englishman Ian Poulter on social media, you will be aware he is a car enthusiast, and that he has a penchant for red Ferraris.

Petrol-head Poulter has trousered almost $40m (£26m) in career earnings since turning pro in 1996 - out went the green Vauxhall Astra, in came five Ferraris, one of which is a £1.5m limited edition Ferrari Enzo.

In addition to his Italian supercars, Poulter also owns a Rolls Royce Ghost, and a Ford GT-40.

He houses some of his motors at his 10,000-plus square foot mansion near Florida's Lake Nona Golf and Country Club.

The 2011 Masters champion became a licensed pilot in 2007, and can be found flying a plane and a helicopter in his spare time.

The South African's father is also a keen pilot, and keeps his son's plane in working order when Schwartzel is on the road competing.

“Every time I come home, I fly,” he told Augusta.com. “It’s a hobby – time to break away and clear your mind and do things differently."

Schwartzel's father, a chicken farmer south of Johannesburg, said: "He’s been driving tractors and harvesters all his life and was never scared of driving those. That’s why he’s not scared of flying helicopters. It’s the same principle.”