Wozniacki to blame for McIlroy's meltdown in Dubai 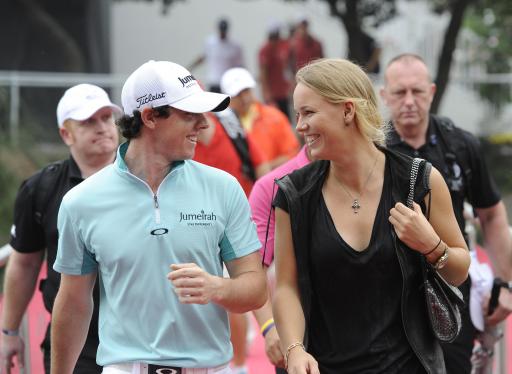 RORY MCILROY had fiancée Caroline Wozniacki in his corner as he stumbled to a ninth place finish at the Dubai Desert Classic yesterday and I think she was to blame for the 24-year-old’s demise on the final day.

Of course Rory came out and said he didn't have his A-Game with him at the weekend - one that ranked some way off his scintillating 63 that he posted on day one - but for the duration of his 74 knocks on Sunday it looked as though his mind was elsewhere.

Tennis star Wozniacki was McIlroy’s No.1 cheerleader and could be seen talking to the Nike staffer throughout his final round. She was at the tee boxes, alongside him on the fairways and never far away on the greens. On a number of occasions the TV cameras showed the pair having a chinwag.

McIlroy was simply being taken out of his zone. There was no greater example than on the 14th tee box. Rory had just bogeyed three of the last four holes, two of which were easy par-5s, and was three shots down on his playing partner and eventual winner Stephen Gallacher. The Ulsterman should have been concentrating on the job in hand as there was still time to turn things around with a big finish.

Wozniacki was standing by Rory's side on the tee box, as the Northern Irishman munched away on an energy bar. Okay maybe that gave him a confidence booster to know he had his supporter and wife-to-be there alongside him, maybe giving him the gee-up for a big finish, but this is a former World No.1 we're talking about.

You could kind of see in Rory's eye that he'd rather she was standing behind the ropes some 330 yards away.

Let's put it this way, if Wozniacki was one set down to Serena Williams in the final of an event, would she really want Rory pulling up a chair to console her? No. Well actually on second thoughts...

There is a time and a place to have a chat with your partner, and in the middle of a tournament which you have a good chance of winning is not the time. I'd go as far to say it was unprofessional.

McIlroy struggled with an upset stomach on the second day but his final round was the most concerning. His mind seemed to be elsewhere as he sprayed drives all over the shop and his short game looked in tatters.

Gallacher went on to retain the trophy for the first time in the event's 25-year history and embraced his tearful family on the final green.

That's just it. Family and friends. The back of the 18th green.

Did you watch the action unfold in Dubai? Did Caroline really get too close to Rory in the final round? Share your thoughts in the forum below or tweet us @Golfmagic.