Jordan was called Justin at the RBC Heritage jacket presentation. 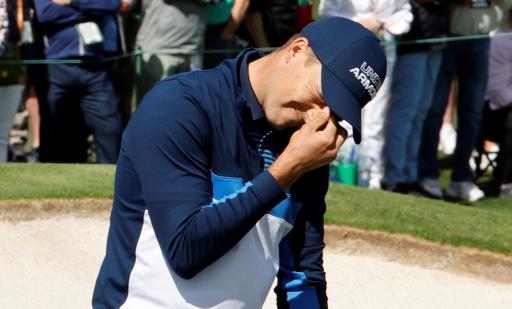 Justin Thomas has responded on Twitter after seeing Jordan Spieth was called "Justin" during the RBC Heritage jacket presentation at Hilton Head on Sunday evening.

Spieth defeated his fellow Ryder Cup compatriot Patrick Cantlay with a par at the first extra hole after Cantlay's ball had unfortunately plugged in the greenside bunker.

The three-time major champion picks up his first victory as a father and his 13th career title on the PGA Tour. It marks his first win in just over 12 months following victory at the 2021 Texas Open.

As Spieth went to pick up the iconic RBC Heritage jacket for the winner, he was announced onto the stage as "Justin Spieth."

"I’d like to thank all my fans and supporters on my t35 I mean victory yesterday it means a lot," Thomas tweeted after hearing what happened in the trophy presentation.

I’d like to thank all my fans and supporters on my t35 I mean victory yesterday it means a lot https://t.co/2htykcDwbv

Spieth enjoyed an incredible final round at Hilton Head, highlighted by two eagles on the opening par-5 holes, the first of which came from out of the greenside bunker.

The victory now vaults Spieth back up into the world's top 10 as he now sets his sights on joining an elusive group of players to complete golf's career grand slam with victory at the US PGA Championship at Southern Hills next month.

Spieth has three major victories to his name comprising the 2015 Masters, 2015 US Open and 2017 Open Championship.

Next Page: Here's how much they all won at the RBC Heritage on the PGA Tour