See the par-five sixth at Bay Hill this week like never before. 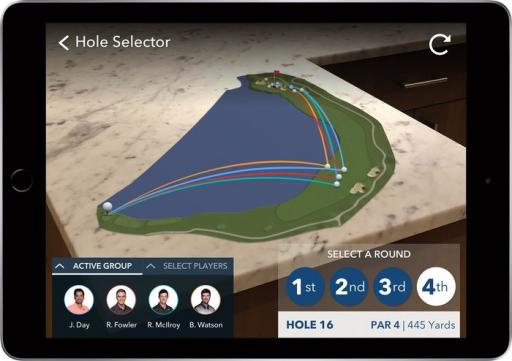 Available on iPhone or iPad, PGA Tour AR shows a 3D image of the hole and players' shot trails on any flat surface in front of the device’s camera.

All shots will be logged, allowing you to compare how each player took on the iconic hole.

Golfers are also able to see the famous par-three seventh hole at Pebble Beach, and can view how players took it on in the recent AT&T Pebble Beach Pro-Am.

And at the 2018 Players Championship, holes 16-18 will work on the app, as will the final hole at the Tour Championship. In the future, the Tour hope to have at least one hole at every venue working with the technology.

“This particular innovation is unique in that it lets us serve the core fan even deeper with all kinds of 3D imagery and data and a better understanding how a particular hole plays,” said Rick Anderson, the Tour’s chief media officer.

“But it also helps us attract a new audience of people who may not necessarily be golf fans but are drawn by the technology and discover our content. It’s about growing our audience. It’s not just technology for technology’s sake.”

The Tour already launched PGA Tour Hololens, which offered augmented reality, but required users to have the correct goggles to use the technology.

“That’s been the question on our minds,” Anderson said. “How can we bring this immersive technology to millions of people at the same time?”

The PGA Tour hopes to develop the app, with avatars for players and more sophisticated features for fans.

“Say a ball bounds up the fairway but you can’t tell who hit it,” Anderson said. “You’ll just hold up your device, you see the shot trail and the player and now you know, ‘Hey, that was Rory McIlroy who just bombed one 300 yards.'”