Sangmoon Bae with the greatest PAR save in PGA Tour history

Bae lands a PGA Tour record for par on day one at 3M Open... 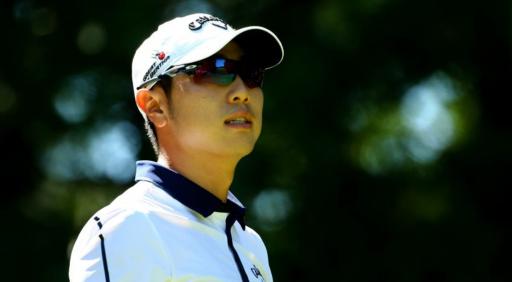 Sangmoon Bae landed a PGA Tour record on day one of the 3M Open for the longest hole-out for par from 250 yards.

Bae found the water with his tee shot down the par-5 18th, and then took his drop from 240 yards out. Unfortunately for the South Korean, his third shot came up short in the water.

At 18th hole in Rd.1 @3MOpen, Sangmoon Bae sets ShotLink-era record by holing out for par from 250 yards.

Back for another drop, this time from 250 yards, and Bae did the unthinkable by holing out for par.

As a result of his par save, Bae sets a new PGA Tour record in the process for the longest-ever hole-out for par on the PGA Tour, which was previously held by Australia's Steven Bowditch from 176 yards at the 2011 RBC Heritage.

In the bigger picture for Bae, it mattered little as he finished 4-over par for the first round and in tied 143rd place, giving himself a mountain to climb just to make the halfway cut.

Dustin Johnson suffered a similar fate on the par-5 18th on day one when finding the water with his second shot, only to go on and find the water another two times on the hole en route to a disastrous nine.

Johnson finished 7-over par for the first round and then confirmed he was withdrawing from the tournament due to a back injury.

The former World No.1's first round of 78 means Johnson has now played his last three rounds in 23-over par following consecutive rounds of 80 at last week's Memorial Tournament at Muirfield Village.