Callaway Paradym Irons Review: "You won't be short of the pin with these!" 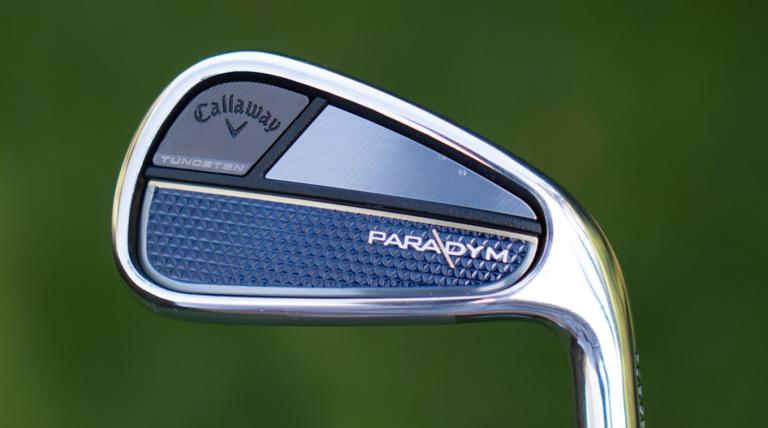 Very long (which might suit some players); superb consistency when it comes to shot data across the entire set; they look and feel incredible
Low spin rates; Price
Our score:
Overall:
4
PRICE: £1199.00 YEAR: from 2023

Callaway has launched its exciting new Paradym irons for 2023 and GolfMagic's Equipment Editor Alex Lodge has wasted little time in putting them through their paces.

Now make no mistake about it. The Paradym Iron is packed full of power.

In fact, we are fairly certain, that you will never be short of the pin with the Paradym irons in your bag.

At least if you strike it out the middle.

When we say these irons are long, we mean really long.

Callaway has also launched another distance-enhancer in the Paradym X iron, which you can learn more about here, but for this particular review we are going to focus on the standard model.

While Alex was thoroughly impressed with the looks, feel and performance of the irons, especially their consistency, he was left scratching the surface at the end of the session - all because of the hefty price tag involved here (RRP £1,199).

Anyway check out Alex's full review in the video below, and scroll further down this article to learn more about the Paradym irons.

What are the Callaway Paradym Irons all about?

The new Paradym irons feature up to 67g of external and internal tungsten weights that are placed precisely to enhance launch conditons and improve speed on mis-hits.

This increase in forgiveness is the difference between hitting the green and coming up short.

Paradym irons feature a players look at address, all in a forgiving package.

A pre-worn leading edge is also designed to cut through the turf more efficiently for even more forgiveness.

Callaway tells us that each face has been uniquely optimised for more speed, higher launch and increased spin consistency.

On top of that, you have an all-new Hollow Body design that features Speed Frame construction for added stiffness to the body and support for the high-strength Forged 455 Face Cup.

This unique construction is the catalyst that stabilises a thinner face for incredibly fast ball speeds.

When it comes to acoustics, the iron possesses patented Urethane Microspheres to deliver an ultra-soft feel and premium sound that discerning players will demand.

Which golfer are the Callaway Paradym Irons best suited to?

The Paradym Iron is designed for golfers who are looking for a players’ distance iron with a refined shape and premium forging.

As Callaway already warned us, these irons are long... and they more than live up to the hype!

In fact, they are certainly up there with the longest irons we have ever tested here at GolfMagic.

But is that really a surprise when the loft of the 7-iron, for example, has been cranked to 29 degrees?!

Isn't that way off a traditional 7-iron? Anyway...

For Alex, that comes in at 4 to 5-iron levels of spin.

Alex considers that the spin was too low because these irons are not really meant for high speed players, such as himself.

The spin would likely be more optimal for the player who does not swing it 98mph for a 7-iron, for example.

On the whole, despite the spin rate being relatively low for our liking, it was very consistent on both centre and off-centre hits.

So we have to give Callaway lots of credit here.

Ball speed with the 7-iron was up around the 130mph mark, and again that remained a consistent number for Alex throughout his testing of the 7-iron.

Another round of applause, please.

On average, Alex was averaging 203 yards with the 7-iron.

We're more than happy with those numbers.

In terms of forgiveness, there is plenty. Not the most we have ever seen from a players iron, but still enough to get us excited.

Stepping things up to the 4-iron, and it was a similar story from a consistency perspective.

Spin was once again a little too low at 3200 RPM, but we were beginnng to see a theme here.

Ball speed with the 4-iron was up just shy of 150mph, which is above even PGA Tour level, but the pleasing aspect once again was the numbers remained consistent.

Alex was cracking the 4-iron out to 265 yards, which I'm sure you will agree is quite staggering yardage!

But on the whole, the consistency of our shot data was once again appealed to us with the 4-iron.

There really is nothing better than consistent numbers when it comes to your irons.

Before finishing the session, Alex dropped it back to a 9-iron to see what was going on there, and he was pleased to find more consistent numbers across the board.

Spin was just over the 6000 RPM mark, which was once again too low, but ball speed remained consistent around the 125mph mark and carry distance at 173 yards.

Alex took a real shine to the fresh blue and gold colour combination of the new Paradym irons.

There is perhaps a little too much chrome going on, which can sometimes cheapen the look of golf clubs, but that is certainly not the case here as we have already established with its price tag.

We were also taken by the relatively thin topline for a players' iron, especially given it oozes plenty of forgiveness.

All in all, the appearance both in the bag, and over the ball at address, instantly appealed to Alex.

As for the feel, it very much impressed us, too.

The Paradym irons possess a very solid feel off the face, especially when balls are struck out the meat of the club.

Alex also noted decent levels of feedback on off-centre hits, marking another positive in the feel stakes, especially in the 4-iron, which is obviously much harder to hit than a 7-iron.

You will certainly not be left short-changed when it comes to feel. It's up there with the best we have experienced from a distance players' iron so far this year.

So lots of big ticks for Callaway in the looks and feel department.

The Callaway Paradym Irons for 2023 are soft, stable-feeling golf clubs that produce consistent numbers throughout the entire set.

Alex, a single-figure handicap player, believes the Paradym irons can rival that of the TaylorMade P790s, Mizuno Pros and Cobra Forged Tec, which also present plenty of power and consistency in the players iron category right now.

The new Callaway irons go a very long way, and they are incredibly consistent when it comes to shot data - that's our main positive here.

While not a 10/10 iron for us, it's certainly towards the top end of the market and you should certainly consider these if you are in the market for a premium player iron that adds distance to your game.

The biggest niggles for Alex are obviously the price, especially during a current cost-of-living crisis, but also the spin rate too, which was just a little too low for him across the board.

However, as we mentioned earlier in this review, the spin was too low more of a result of these irons not really being designed for high-speed players such as Alex.

In conclusion, if you seek added distance, plenty of forgiveness and fantastic feel from a brand new premium iron in 2023, and you have the cash to splash, then no look no further than the Callaway Paradym irons.

They certainly offer plenty of bang for your buck.