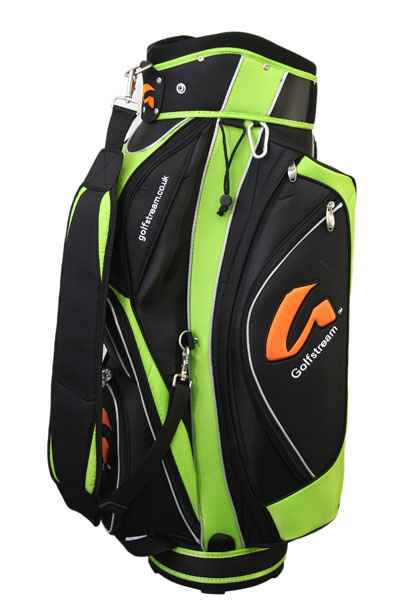 Since taking delivery of this distinctive bold green and black bag, it has had many complimentary glances from other golfers - especially when attached to the green Golfstream Revolution powered trolley. The colour co-ordination might not be to everyone's taste but it's certainly to mine.

As well as having an eye for colour 9it's also available in orange) the Golfstream designers have even gone that extra stitch to ensure the bag lacks for nothing - even to the point of creating a detachable front panel that allows societies or corporate clients to order their own logoed replacement pocket panel for £39.99 including VAT.

It was also obvious that some creativity also included that from real golfers with a clip on the side to make the most used club in the bag easily accessible. Even the size of the pod holding the inverted butt end of the putter was large enough to hold those increasingly popular fatter, jumbo grips.

Weighing in at an incredibly light 3.2kg (excluding rain hood and carry strap) - less than most of the modern carry bags - the Golfstream also features the facility to firmly lock into place on a Golfstream trolley without the necessity for bungee straps to hold it in place. There are four lifting points and loops to hold the umbrella in place.

As modern golfers we're encouraged to drink plenty of fluids and keeps our nourishment upto scratch to help retain our concentration and Golfstream has thought of that, too with a substantial, easily accessible insulated pocket to keep our drink and foodstuffs cool.

Initially I'd used it for golf balls and winter mittens but soon found it was a waste of an excellent feature, as my driving got straighter and the temperature rose!

As well as 14 full-length, graphite friendly dividers - a useful extra one when I'm club-testing now that I can clip a putter on the side - it has four generous side pockets and two large lower front pockets, a valuables pouch and one large enough to carry your golf shoes.

The Golfstream bag looks good and is both robust and lightweight, built by golfers for golfers. It's hard to fault and at under £85, it's exceptional value.