"TaylorMade have focused on three key features for this new iron design: Look, Performance and Feel. I think we can all agree that they have excelled in these three aspects." 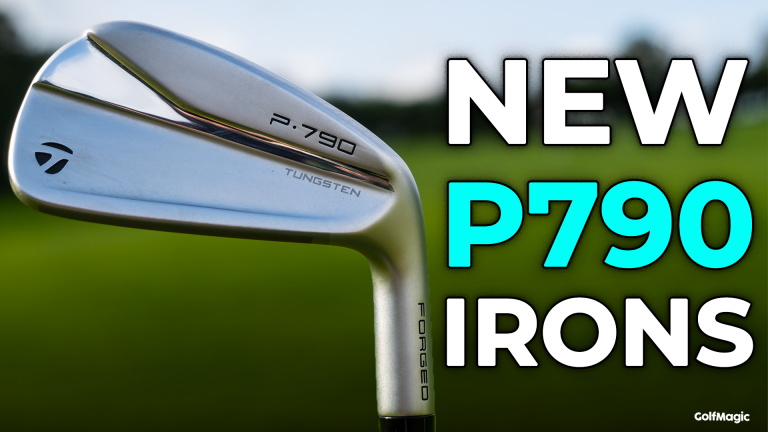 - SpeedFoam Air technology has made the clubhead much lighter, which increases forgiveness and results in a higher ball flight.
- £1,149 could be over budget for some golfers.
Our score:
Overall:
5
PRICE: £1149.00 YEAR: from 2021

Alex from GolfMagic took the new generation of TaylorMade P790 irons to Mannings Heath Golf and Wine Estate to see how they performed.

The P790 irons are now in their third series, the first of which began in 2017, and it is safe to say that this update could be the best that the company have produced.

TaylorMade have focused on three key features for this new iron design: Look, Performance and Feel. I think we can all agree that they have excelled in these three aspects.

The P790s are some of TaylorMade's best-selling irons since their inception in the golfing world and the third generation comes packed with updated SpeedFoam Air technology.

The new generation is suitable for golfers of all ages and abilities. They are forgiving and cater for a broad range of handicaps and experiences.

The new P790 has an incredible look with its sleek, pearlescent finish that makes you appear and feel like a professional golfer. Although the aesthetics don't improve your game, they make the club feel comfortable and satisfying in your hands.

They are designed to a Tour player's level but they have the forgiveness to suit any level of golfer and this is helped by the SpeedFoam Air Technology.

Related Articles
REVEALED: How much money Rory McIlroy has earned in 2022
McIlroy reveals equipment switch that changed his fortunes: "I was struggling!"

Not only does SpeedFoam Air come in a different colour, but it has enhanced the previous SpeedFoam technology to save more weight in the clubhead.

The new P790s are 3.5 grams lighter and this helps to optimize the clubface and contributes to a higher launch and softer landing on the fairways and greens.

Alex loved the flight of the ball and the feeling of the ball's connection with the clubface. Atlhough the new generation doesn't necessarily go further than it's predecessors, it delivers a better flight and more control.

It feels effortless to strike the ball with the new P790 irons, which is what every golfer wants in order to make the game easier for themselves.

We feel that the previous 2019 generation of the P790 produced a lower, piercing flight, but this has now been enhanced thanks to SpeedFoam Air technology.

We definitely maintain that the third generation of the P790 irons could be the best iron product that TaylorMade have ever produced.

The improvements to the looks, performance and design have been made to perfection and the irons will not disappoint you in feel and control when you take aim to the green.

The flight and feeling off the clubface is effortless and arguably unrivalled amongst other irons in the game. This is also helped by their forgiveness and new weight-saving design.

They will retail for £1,149 on September 3 and although this seems a high price to pay, you can rely on the new P790s delivering for you for years to come.