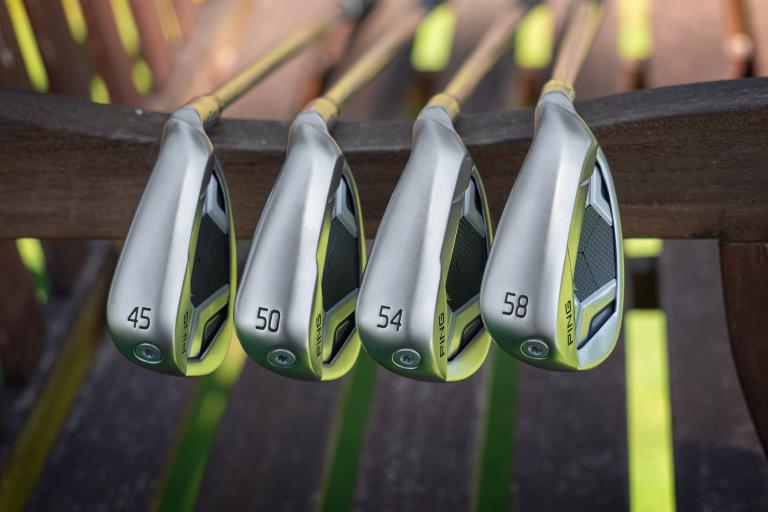 - The quality of ball-striking and dispersion with these new irons is extremely impressive. - The extra distance with these irons can help a wide range of golfers. - The sound and feel have been improved since the last PING iron release.
- The look of the irons is a little ugly, but this is down to personal preference.
Our score:
Overall:
5
PRICE: £150.00 YEAR: from 2023

PING has introduced the new G430 family in 2023 and one of the highlights is the new G430 irons, one of the best game improvement club sets you will come across this year.

The PING G430 irons represent a significant improvement in sound and feel when compared with the older G425 irons. The brand has made technological changes and refinements to create this improvement.

A shorter hosel shape, more bounce, the PurFlex cavity badge and multi-material construction have all been instrumental in creating one of the most forgiving irons to be released this season.

Although these irons aren't focused on workability and players at the top end of the game, they serve a purpose for a wide spectrum of golfers who want straighter shots and a range of distance options across the bag.

The PING G430 irons are available in three different loft options: Standard, Power and Retro. This is how the brand has provided a range of options for golfers as the different specifications vary in degrees.

Take a look below at GolfMagic's review of the PING G430 irons on YouTube and leave any questions or comments you have in the comments section below the video.

What are the PING G430 irons all about?

The multi-material construction produces distance gains of between seven to 10 yards. It is PING's longest iron and this has been made possible with the lower centre of gravity and stronger, custom-engineered lofts.

The thinner face delivers up to 2 mph more in ball speed and this also leads to a distance increase. PING has also endeavoured to increase speed without losing its well-known forgiveness qualities.

Added distance is brought by the PurFlex cavity badge. This has added seven flex zones that allow for more free bending to increase speed across the face.

The badge also contributes to a solid feel and a pleasing impact sound. The stronger lofts across the set have resulted in an addition of a 41-degree pitching wedge. This allows for more proper gapping options and standard lofts in traditional scoring wedges.

The PING G430 irons can suit any player who is looking for more distance and more forgiveness. Although they are game-improvement irons, they can suit low handicappers because of the quality of dispersion and ball-striking they offer.

These irons are not focused on workability, but to help golfers improve their ball-striking in general. They are pleasurable to hit and these features can suit most golfers.

The PING G430 irons still have a thick top line and offset when you look down at address. As with many PING irons down the years, the look and thickness of the heads instil confidence, but some golfers may not enjoy the thick top line.

One part of the irons that we don't enjoy is the iron numbers on the club faces. This is a feature PING has used for some time. However, this feature is down to personal preference.

The PING G425 irons had good forgiveness across the face, but the sound and feel were lacking. With the G430 6-iron that we tested, we also enjoyed the forgiveness. Our dispersion was solid and we enjoyed how many straight shots we hit.

We noticed a definite improvement in the sound of these irons. They represent a significant improvement from the previous G425 irons. When finding the middle of the club face, we enjoyed the connection and ball-striking qualities.

Although these game-improvement irons were forgiving and delivered good accuracy, we still received good feedback from the club face on off-centre hits.

There are three different loft options in the PING G430 range and the Retro is the highest degree 6-iron at 27.5 degrees. In the Standard loft, the 6-iron is 25.5 degrees and the Power loft is 24 degrees.

With the Standard loft, we averaged 221 yards in distance and 214 yards in carry. The PING G430 irons offer forgiveness that can't be bettered by any other this year. We saw dispersion and a flurry of straight shots that we haven't seen before with this type of iron.

We were particularly impressed with the performance of the long irons and they offer an important service to your bag for shots over 200 yards.

It is fair to say that we were delighted with the PING G430 irons. In terms of game improvement and the quality of ball striking, you are unlikely to find another iron that will improve your scores across the board.

We enjoyed the improvement in sound and feel from the previous G425 iron set which didn't deliver in terms of impact sound. The enhanced feature of distance will always be attractive to golf fans who are looking for an iron that can help them travel further down the fairway and to the green.

The three different options also help to cater for a wide range of golfers and it is exciting to see that PING has put a keen focus on distance while maintaining forgiveness.

We would recommend the PING G430 irons to any mid-to-low handicap golfer who wants a general improvement to their game. You are highly likely to experience better ball-striking and more distance with PING's latest release.