GolfMagic tests and reviews the latest electric trolley from Powakaddy. 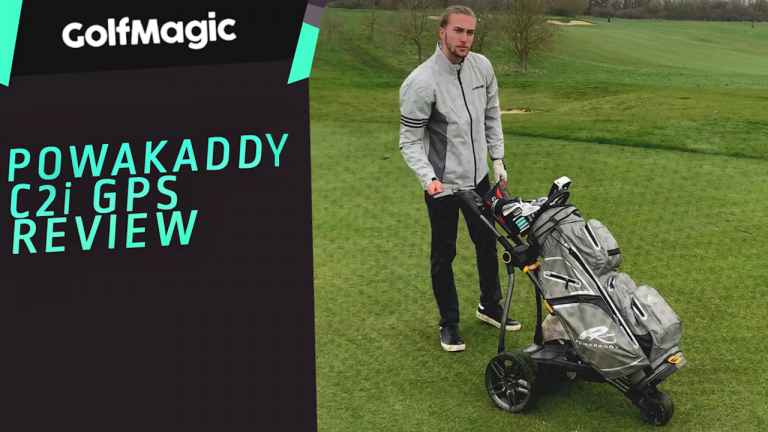 The Powakaddy C2i GPS is the first compact trolley in the world with an integrated GPS system. Meaning there is no need for an external GPS device in order to get your yardages.

With the electric trolley market being a very competitive area, it was time for a brand to add something new to the industry and Powakaddy have done just that. GolfMagic took the C2i GPS down to Farleigh Golf Club to give it a test run...

The built in GPS is a fantastic feature and makes getting your yardages very easy. Using an app on your phone as an external device isn't a problem, but this does take away the need for your phone during your round which we liked a lot. The yardages are very accurate and the screen is clear to read, even when the sun is shining. The ability to see how many yards you are from hazards is also a brilliant feature, espeically on par 5's that you might be trying to reach in two. The only issue there is that it doesn't tell you which hazard you are looking at, so if there are to bunkers and you can't see them, it's a bit of a guess as to where they are located. I'd also like to see the image of the green change depending on the shape of it on each hole, as it just stays the same throughout your round, which makes it a little pointless. As mentioned in the video, there were a few occasions when the GPS was telling me the wrong par for the hole, which if you hadn't played the course before could get a little confusing, but this was very easy to sort out by simply updating the GPS using the Powakaddy app.

The C2i GPS is a part of Powakaddy's compact range, meaning it's smaller than other Powakaddy trollies such as the FW7. I think the colour scheme of the trolley looks premium, but I felt it looked slightly chunky for a compact trolley, but that's just personal opinion. I think this was down to having dual bars that lead up to the handle, instead of just one which may have made the trolley look smaller. But saying that, the trolley didn't feel heavy at all, weighing at around 10kg the C2i GPS is very easy to get to and from your car. The wheels are also very easy to take on and off if you want to save even more room in your car or give the wheels a thorough clean.

With an RRP of £699.99, the C2i is a big investment, but you expect that with all premium electric trolleys on the market. The C2i GPS offers you everything you need in an electric trolley. It doesn't take up too much room, it's light, easy to function, and the built in GPSis a very useful feature that saves you using your phone, watch or handheld GPS.