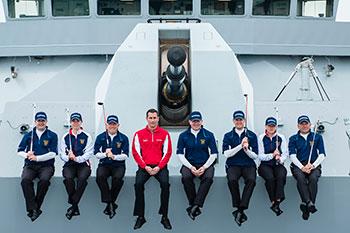 MEMBERS of the Royal Navy’s golf team are hoping to go one better this year and become Inter-Service champions now they have been decked out in the latest high-performance clothing from Galvin Green.

The 20 men and 15 lady golfers who make up this season’s RN squad (average 3-handicap) have all been fitted with SKINTIGHT Compression base layers and Alvis GORE-TEX jackets to give them the best chance of defeating the Army - current holders of the Inter-Service Championships - this September.

“Confidence is such a big part of the game of golf that wearing top class clothing by Galvin Green is a real bonus for the squad going into the various matches this season,” said Commander Kevin Seymour, who oversees an annual calendar featuring matches against non-military opposition including the R&A and Royal Blackheath.

“We lost out to the Army in the final last year, but hope to win the Inter-Services again in September, having won it twice before.”

The BEST clothing deals from Scottsdale Golf to start your year!
FootJoy launch their latest line ahead of the new golf season: FUEL

The squad’s crested clothing was provided by online retailer Premium Golf, who will add some short sleeved shirts for those playing in the Navy Championships at Saunton Sands, Devon, in June.

“Many leading Tour Professionals choose to wear Galvin Green outerwear to perform well in challenging weather conditions and we were delighted to supply the Royal Navy squad in a year when they are determined to get back on top,” said Premium Golf’s Alex Nicolson.

To view the full range of new products visit www.galvingreen.com