"I had to hit chips off putting greens all the time," says US Open champion Woodland. 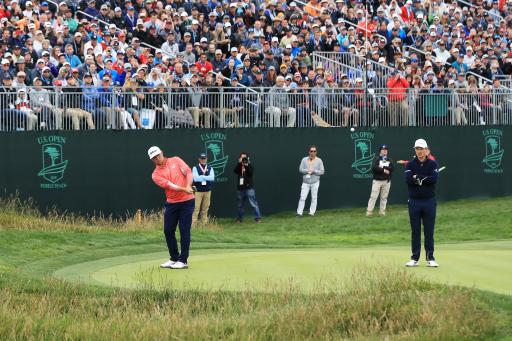 US Open champion Gary Woodland never had any doubt what he was going to do when he stepped onto the green at the par-3 17th as he saw his ball some 60 feet away from the flag but with a corner of rough in the way.

Woodland pulled out his wedge and chipped his ball off the green over the rough, before checking it up superbly down the slope to within two feet of the cup for par.

With a comfortable two-stroke lead up the last, Woodland played three sensible shots into the heart of the green and then drained his 35-footer for birdie to win by three strokes and seal his maiden major title at Pebble Beach.

WATCH: WOODLAND HITS UNREAL CHIP OFF GREEN TO LOCK UP US OPEN

So just how nervous was Woodland standing over his chip off the putting green at 17?

Well not really, for he had been honing his skills on this shot for the best part of 14 years.

“I started working with Randy Smith in 2005 I believe, and the short game was what was really bad, to be honest with you,” said Woodland.

As for the execution of the shot itself, Woodland just wanted to get the ball to the hole for an easier putt.

“Pete Cowen and I were working on trying to hit spinners off that early this week. That’s what I was thinking about when I was standing over it, and it came out perfectly.”