How the ONE-ARM downswing drill can help any golfer of any age... 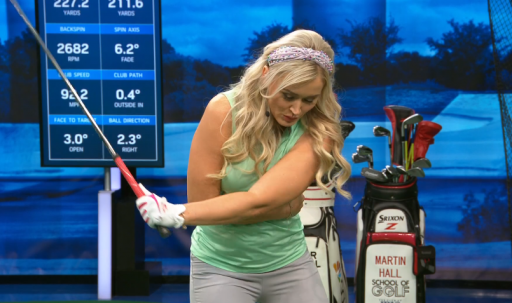 Here's a very useful ONE-ARM downswing drill that works for any golfer of any age, according to Golf Channel 'School of Golf' hosts Martin Hall and Blair O'Neal.

Watch this short 2-munute video, which looks at a very simple move that pulls the lead side of the body to help you hit better shots...

NOW WATCH: HOW TO HIT ONE OF THE SCARIEST SHOTS IN GOLF

Blair O’Neal, has been golfing since the age of 11, playing in tournaments all around the world. She played for Arizona State University where she won two NCAA Long Drive contests; she also competed on the Golf Channel’s Big Break: Dominican Republic, where she won MVP and an exemption to the 2011 LPGA Kia Classic.

As a junior golfer, Blair was selected as a member of the U.S. Junior Ryder Cup Team. Blair has been modeling throughout her golfing career and was named one of Sports Illustrated “Top 50 Hottest Athletes of All Time” and remains a mainstay on Golf.com’s list of "Most Beautiful Women in Golf".

Martin Hall turned professional in 1975. He has competed on the European Tour as well, and has since turned his career toward teaching the game he loves. Martin currently is the head teaching professional at Ibis.

He is also a Master Professional of the PGA of Great Britain and Ireland. He has appeared in the Golf Magazine Top 100 since 1994, and in the Golf Digest Top 50 since the list began in 2000. Martin is currently ranked as the number 10 teacher in the country..