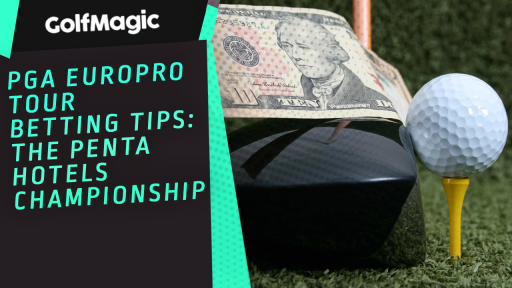 GolfMagic's Andy and Jack are back with this week's tips for the next event on the PGA Europro Tour, the Penta Hotels Championship.

Congratulations to Daniel Young, who last week finished 12 under par to win his first PGA Europro Tour event of the season, winning the The Eagle Orchid Scottish Masters at Spey Valley on home soil in Scotland.

Young shot rounds of 65, 67 and 69 on the final day to win the event and take home the £10,000 prize. Andy's pick last week, Richard Mansell, made a late storm through the leaderboard, shooting seven under par on the final day, but it wasn't enough to take the lead, but another great finish for Mansell and a tasty £6,000 for second place.

Cobra Puma NXT LVL Academy player Joe Brooks had another great week at Spey Valley, shooting six under par for the tournament to finish T5, helping him climb the leaderboard in the Cobra Puma Order of Merit.

This week, we head to Caversham Heath Golf Club for the Penta Hotels Championship. The course, located in Reading, is a 7,151 yard par 73 and will require accurate tee shots if the players want to shoot low this week.

Jonathan Caldwell - 14/1: It's a tough course this week but I don't see anything but a win for Jonathan Caldwell. Richard Mansell will be hot on his heels, but I fancy Caldwell to hold him off and get his first win of the season at Caversham Heath. He was solid at the Eagle Orchid Scottish Masters, shooting 65, 69 and 70 to finish in third place. Caldwell will be disappointed he didn't have a better final round, as he very easily could have gone on to win it. He's finished in 3rd and T3 in his last two starts on the PGA Europro Tour, so he's hungry to get that first win of the season and now's the time for him to step up and do it.

James Frazer - 33/1: My outside bet this week is going to be James Frazer who I feel is too good of a player to have odds that long. This lad is a part of the Cobra Puma NXT LVL Academy and has been absolutely smashing his Cobra F9 Speedback driver. He didn't play last week, so I think the rest will work in his favour. In his last tournament he finished in T5 at the Cobra Puma NXT LVL Championship, so I fancy him to perform well this week.

Richard Mansell - 14/1: I picked him last week and I'm sticking with him again. That final round last week was something special, he's a seriously good player. He's already won this season and he is bound to win more, so it's Mansell to win for me.

Mark Laskey - 60/1: I think 60/1 is a huge price for Mark Laskey. Another Cobra Puma NXT LVL Academy player with a lot of talent and a great fairway finder, something that's going to prove crucial this week. He's not been in the best of form lately, hence his price, but I fancy Laskey to come out fighting this week.