Home » Tips and Instruction » Bunker play
In Partnership with

Struggling with greenside bunker shots? Practice with your 8-iron...

Practice hitting greenside bunker shots with your 8-iron to radically boost your confidence with a sand wedge... 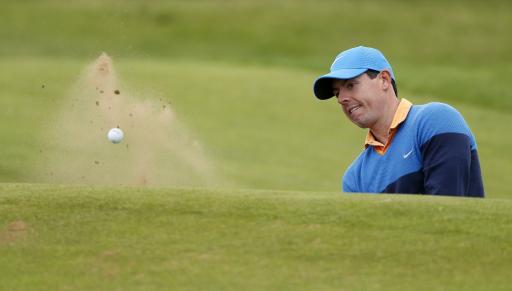 You're probably thinking the greenside bunker shot is a tough enough assignment with a clean lie and a sand wedge to hand, so we can only imagine what you're thinking after reading the headline to this golf instruction article.

But no, this is not a typo. We are encouraging you to pick up your 8-iron and get to work in the sand. After all, the late Spanish legend Seve Ballesteros once used to practice bunker shots using a 3-iron to get his ball close to the pin.

Once you've mastered the art of hitting an iron out of a greenside bunker, you will feel so much more comfortable when it comes to using your regular 56-degree wedge.

GolfMagic caught up with PGA coach Simon Garner to learn more about this effective 8-iron bunker drill, which will help you hinge your wrists during a high lofted bunker shot...

Grab an 8-iron and set up the clubface and ball as uncomfortably forward in your stance as you can on a flat bunker lie. What you're trying to do is get the clubface as open as possible to give it the same loft as a sand wedge or lob wedge.

The aim is to train yourself to adapt to any situation no matter what club or stance you have. It's a drill to give you the confidence to hit any tricky shot and it's great fun.

Instead with your 8-iron, lean back slightly, force the clubface open and hinge the wrists to generate the extra loft you want on the clubface.

Notice as well that despite the unusual set up and swing, the elbows will remain very close together. This triangle with your forearms and shoulders is vital for stability during the swing.

With a few goes at this very challenging shot, you will understand the science behind hitting a beautiful greenside bunker shot and when it comes to using a sand wedge it will feel so much more natural to you.

Give it a go and let us know how you get on.