WATCH: The perfect way to hit a greenside bunker shot

Check out the perfect technique on how to play the greenside bunker shot and get out first time, every time. 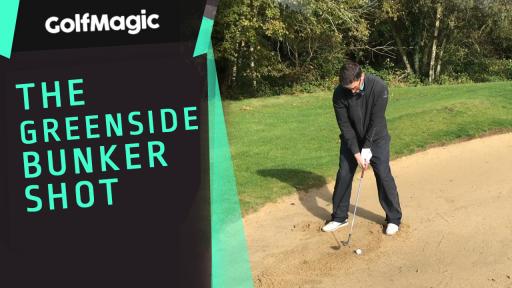 Professionals make bunkers look so easy don't they? As long as they have a pretty decent lie, you can put decent money on them having no issues with flying the ball out to the exact spot they were aiming at. For many amateur golfers, bunkers can cause all sorts of problems. There's nothing more frustrating than hitting a few decent shots, unfortunately finding the bunker, and then taking two or three attempts to get out.

It's something that can completely ruin a hole for the amateur golfer and if it's a regular occurence then it's going to start ruining rounds.

There are a few things you can do in a greenside bunker to ensure that you get out of the sand first time every time and give yourself a chance on the putting green.

Now this technique changes depending on the lie of the ball, but for a standard greenside bunker shot with an okay lie, this technique could start saving you a lot of shots out of the sand.

It might not happen for you straight away, as your technique could be completely different, but stick with it and practice. The more practcice you put in, the better you're going to become at the shot and you can start getting the ball closer to the hole.

Paul Babbage is a PGA Professional at Farleigh Golf Club and his short game is spot on. GolfMagic has been working with Paul to create a new bunker tips series, so keep your eyes peeled for plenty more videos of Paul showing you how to play all sorts of shots!

Watch the video in this article and check out Paul's simple technique on how to escape a greenside bunker.