Tiger Woods has a peculiar new practice routine for when he's in the bunker... 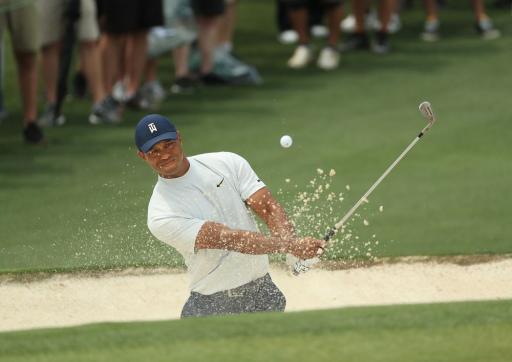 Tiger Woods might not need a great deal of practice at any particular shot on the golf course, but he does have a very effective practice drill when it comes to playing greenside bunker shots.

Check out this awesome clip of Woods exaggerating the feeling of widening the arc in his downswing to play different types of bunker shots...

"This is a great drill to work on because bunker play is about where you enter the sand and how deep you go in the sand," said resident GolfMagic instructor and Advanced PGA Member Duncan Woolger. "Wider should encourage less depth."

Woods is currently enjoying his off season following an impressive end to 2019 with victory at the ZOZO Championship in Japan, before leading the United States to Presidents Cup victory as playing captain against Ernie Els' International team.

Despite missing the events in Hawaii to kickstart the year, Woods is expected to make his 2020 debut at the Farmers Insurance Open at Torrey Pines, which he last won in 2013.

He has until January 17 to confirm his participation for the tournament commencing on January 23.

Rory McIlroy has confirmed his participation in the tournament.

In need of some more helpful bunker tips? Check out what McIlroy, Dustin Johnson and Jon Rahm have to say.

The three TaylorMade staff players explain some of the drills and thought processes they go through before attempting to get their ball up and down from the greenside bunker with their wedges.

As always, there's some classic commentary from DJ in this...