The No Stance Bunker Shot

This always feels like a tricky shot to play, but watch this tip on how to play the no stance bunker shot. 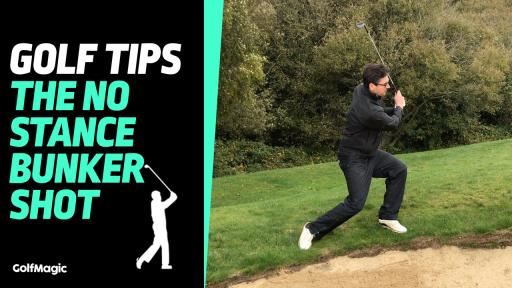 So you're in a bunker and you're not plugged or in a footprint, you've actually got a pretty good lie, but your ball hasn't quite made its way down to the middle of the bunker and you've got nowhere to stand. This is always a challenging shot to face and you'll find yourself trying different ways to get the best stance possible.

In the video below, you'll find another brilliant bunker tip from PGA Professional Paul Babbage who explains the best way to play this shot.

"So I'm in this greenside bunker and my ball has finished right up the lip so it's at a point where it's very awkward to get a stance," says Paul.

"There's a couple of things that might help you with his sort of shot. One, always take a stance that gives you the best balance and is the most comfortable, because one thing that I see a lot of people do is they try and stand in the bunker all the time, but don't be afraid to take a step out because if you always try and stand in the bunker, you'll get over the top of the ball and lose your balance.

"Don't be worried, even if both your feet are outside the bunker, it's not a problem. In this situation, both my feet are going to be outside the bunker so I need to get a bit lower to the ball, so I need a bit more knee bend than I usually would, so that I can get down to the shot and then I'm going to take a really wide stance because this is all about balance.

"This isn't about power, it's about getting a good connection on the ball. The key with this shot, as well as any other bunker shot, is getting your weight onto your left side (right handed) as you hit the shot, so if your weight is moving towards the target, the ball is too.