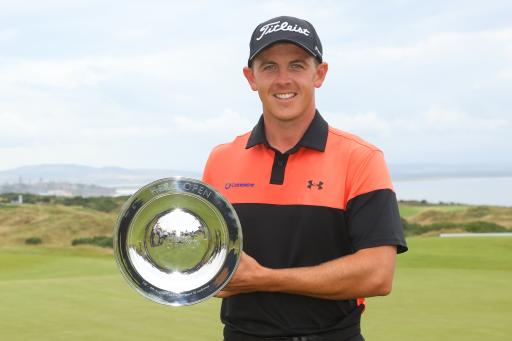 Grant Forrest became the first Scotsman to win on home soil in nearly a decade as he triumphed at the Hero Open at Fairmont St Andrews.

The 28-year-old started the final round in a share of the lead with compatriot Calum Hill and the pair traded blows on the front nine as they both made the turn in 33 shots. The turning point of the afternoon came on the 10th hole as Hill double-bogeyed the hole, with Forrest making birdie for a three-shot swing.

Forrest then birdied the 11th to move to 23-under par and he was joined on that number by Englishman James Morrison who made a late charge with a 9-under par round of 63. Forrest lost the lead after a bogey on the 16th but he recovered with a birdie on the 17th and left himself two feet for birdie - and victory - on the 18th.

Forrest tapped in the putt in front of the home fans, signing for a 6-under par round and a 24-under par total, also securing the first Scottish win on home soil since Paul Lawrie triumphed at the Johnnie Walker Championship at Gleneagles in 2012.

"So many emotions," said Forrest.

"To do it in front of everyone who has come up to support me, the last year and a half has been a real challenge on and off the course. I’m delighted, it’ll take a while to sink in.

"I hit a poor shot into 16 and tried to be a bit too safe and three putted, I saw the scoreboard and knew what I needed to do. The big thing all day was one shot at a time, just keep hitting shots. I hit a great nine iron into 17, nice and close, that really helps. And two great shots into 18, it was a great way to finish.

"It means so much. We’ve been through quite a lot as a family. To do it here, it’s what I’ve always dreamed of, winning a European Tour event. I can’t believe it.

"It’s one thing doing well in amateur golf but turning pro and doing it week-in, week-out on different golf courses. I’ve had to make a lot of improvements and changes to my game to get to this point. It’s just really fulfilling to see it come off this week.

"Golf’s a funny game, you never know when it’s going to click and when it’s going to be your week. Last week was the complete opposite – things didn’t go our way at all. You keep doing the right things, trusting that and fortunately this week was our week."

Morrison finished second, two strokes ahead of Spain’s Santiago Tarrio who continued his incredible recent form with a 21-under par round. Hill and compatriot David Law shared fourth place on 20-under par.