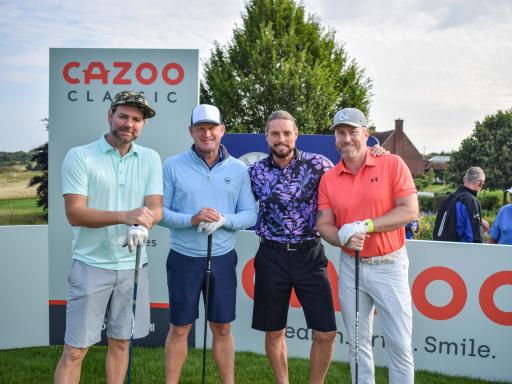 Stars from the world of sport and entertainment have teed London Golf Club up for a fantastic week of European Tour action with a successful Pro-Am event today.

A number of celebrities from the world of showbiz, pop, football, cricket, horse racing and darts joined 16 professionals to kick off the Cazoo Classic, formerly known as the English Open, in style on Wednesday, ahead of the main event commencing on Thursday, August 12.

Westlife’s Brian McFadden and Boyzone’s Keith Duffy were among the pop stars joined by Strictly Come Dancing legends James Jordan and Anton Du Beke as some of the big-name personalities in the field.

Former footballers Teddy Sheringham and Lee Dixon were up against some other recognisable figures from the sporting world. Cricket was represented by Allan Lamb and Darren Stevens, while current and former darts players Nathan Aspinall and Wayne Mardle were hoping they could find the target on London Golf Club’s highly-rated USGA greens.

Record-breaking jockey, Sir Anthony McCoy, was the headline name from the horse racing world, while Mick Fitzgerald and Richard Hughes, as well as ITV Racing presenter, Oli Bell, also teed it up on London Golf Club’s esteemed Heritage Course, the same course that will play host to some of the world’s best players as they battle it out for European Tour glory for the rest of the week.

The professionals playing with the impressive list of amateur VIPs included Cazoo Classic favourite Bernd Wiesberger, Andy Sullivan, Eddie Pepperell and Richard Bland, who relished in the opportunity to have an extra practice round ahead of the main event.

London Golf Club’s chief executive, Stephen Follett, said: “It’s always a great start to the week hosting a Pro-Am – an enjoyable event used as an additional bit of preparation for the pros ahead of a European Tour competition of this magnitude.

“We were so excited when we saw the list of amateurs competing today. There were some real household names from across the sporting world, as well as some television royalty, and we were delighted to welcome them to the club.

“It gives the fans and our club members an extra element to enjoy. As if seeing some of the world’s best golfers isn’t good enough, they also get the chance to see some of their childhood heroes and current celebrities!”

Visitor tickets for the Cazoo Classic are still available, with prices starting at £29 for each tournament day. To purchase tickets, please visit: https://cazooclassic2021.eventbrite.co.uk/?aff=LGC