Poulter reveals he was refused entry "for a good chunk of the second half" as he watched England lose on penalties to Italy at Wembley... 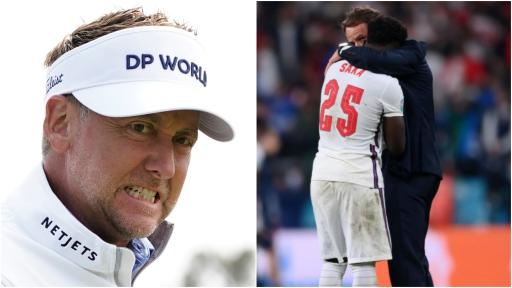 Ian Poulter took to Instagram to reveal his "crazy day" that saw him race from the Scottish Open to Wembley to watch England vs Italy in the Euro 2020 final on Sunday evening.

The Englishman carded a stunning final-round 63 to vault up the board to 17-under par, which was enough to hold a share of the clubhouse lead when bad weather brought a suspension of play at around 5pm in North Berwick.

Poulter, who was given tickets last-minute to head to the Euro 2020 final, was therefore forced to hang around the clubhouse to see if his score was going to be good enough for a playoff as the leading groups finished off their rounds.

As it turned out some 90 minutes later, 18-under par was eventually set in the clubhouse and it meant Poulter and his team could jump in their private jet to travel to Wembley for the cup final.

Poulter documented his "crazy day" on his Instagram page and story, explaining he eventually made the second half but was initially denied entry for a "good chunk of the second half".

Min Woo Lee ended up winning in a three-way playoff with a birdie on the first extra hole.

England ended up losing to Italy 3-2 on penalties.

"Weather delay keeps us from leaving the course and catching an all important flight to make the England match.

"Finally when play resumed and one player had posted 18-under par we left for the plane. NetJets did what they do best and go me to the stadium for the second half.

"Euro 2020 [officials] would not let me into the ground for a good chunk of the second half. Not sure why?

"Anyway finally made it in to watch the remainder of the game.

"Amazing experience with a few of us in a box and truly gutted for the lads to not finish it off in penalties.

"Finished T4th at the Scottish Open and moving into The Open this week feeling good.